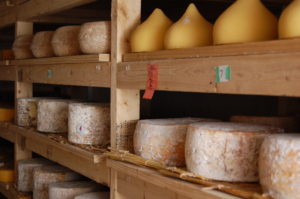 Step into the Murray’s Cheese Caves with Amanda Parker

Sometimes, in the dead of winter, when I’m avoiding slippery ice patches and greyed snow drifts on the New York sidewalks or trolling the desolate farmer’s market for root vegetables, I forget about the seasons.  That summer exists in its sun-saturated glory, or spring, with its green grass and rebirth.

I forget, too, that cheese follows this natural cycle the whole year through, each wheel aging and ripening to its perfect condition even as the rest of the edible world lies dormant.  What this means for us cheese-eaters is that there is always something new to focus on, ripe and ready for plucking and enjoying at its peak.  We just need to find it.

So as part of our weekly team meeting, the Murray’s crew went spelunking.  Where the rest of New York goes underground for the subway, we at Murray’s go cave-diving, searching our cellars for just the right wheels to share with our fellow cheeseheads.  And true to season, this week we found rich, hearty cheeses that warm us up and stick to our ribs.

Take Vacherin Fribourgeois, for example.  One of the classic Alpine cheeses that are best in this season, made from the most flavor-packed, concentrated grasses of the summer, Fribourgeois is unbeatable for all things melting.  It’s nutty and rich and just a little bit funky, the Swiss superstar of a wintry fondue.  Try it with a good Comte from just across the French border, throw it in a fondue pot and you’ve got dinner—because who can resist bubbling cheese with bread and meat to beat the February doldrums?

Also in the fill-you-up category are our meaty washed rind cheeses.  Right now, our favorites are the gooey Edwin’s Munster and its firmer cousin Tomme du Berger.  Perfect for this month if you think “love stinks,” our Munster is intensely pungent, not for the faint-hearted but in its prime—like now!—it’s got that barny, umami richness that the Austrians love with pickled onions and brown bread.

Less stinky but equally complex is the Tomme du Berger, a mix of goat and sheep’s milks from Corsica, then aged in Provence.  Firm and slightly lacey, it has hints of the heat of southern France, dry tones like the hay and grass that dot the countryside of its origin.  At the moment, it’s gamy and just a bit stinky with a totally different profile than it will have in the summer, highlighting how much one cheese can change from month to month.

And if we can’t fight the winter blues, we’ll at least eat them.  Bavarian Blue—or Bayrischer Blauschimmelkase, if you can handle that mouthful—is a buttery, mild blue from southern Germany, where a South American cheesemaker churns out this creamy, sweet beauty.  Even though its original recipe was based on the piquant Roquefort, Bavarian Blue doesn’t pack the same spicy punch, so it’s a mellow, smoother flavor.  We love it by itself, since these wheels have a hint of licorice already, or with a seasonal honey for dessert.

From our caves to your mouths, try one of our current seasonal favorites—at least for this week!