Irish cuisine – what comes to mind? Pub food, Irish Breakfast (see: MEAT), shepherds pie, Guinness, heavy, rich foods, right? As I ate my way around County Cork, Ireland my preconceived notions were shattered in just three short days. Now – don’t get me wrong, the Irish Breakfast served at the Ballyvalone House was the perfect way to start the day (especially after a night of local gin cocktails) – four kinds of meat on one plate? YES PLEASE. However…

The “Emerald Isle” is a wildly appropriate moniker. Despite mainly overcast days, I still utilized sunglasses to shield my eyes from blinding bright green foliage and rolling pastures almost everywhere you looked. Its comes as no surprise that the Irish Government and OHRUA (formerly the Irish Dairy Board) is on a mission to grow the country’s agricultural sector significantly over the next decade. What they lack in natural gas or coal, they make up for ten-fold in beautiful lush grasses. And what do we know about amazing grass? Makes for very happy cows. Happy cows = delicious milk. Delicious milk yields incredible butter and cheeses and yogurt, etc., etc.. Ireland is poised (and very excited) to share this bounty with the world.

The unofficial theme for the weekend was LOCAL. We heard from Alice Waters (Ballymaloe LitFest Keynote Speaker) and her adventures opening Chez Panisse in Berkeley CA. in the late sixties. Tales of local growers trading fingerling potatoes for meals – long before anyone had heard of fingerling potatoes and now they’re a familiar staple on many a restaurant menu. The simple of idea of sourcing ONLY local ingredients started the farm to table revolution. Ms. Waters introduced gardening and cooking education to elementary schools that was based off a pilot program hosted at a penitentiary! The restaurant (still open today) was built on idyllic pure concepts, and a “This may not work, but let’s try it anyway.” attitude. Her spirit and accomplishments are admirable to say the least.

I did my part to embrace the local theme. Rather than Guinness, I opted for local Cork County Stout and drank Green Spot Pot Still as my whiskey of choice. (More on Whiskey later.) After a tour and butter making demonstration at the Cork Butter Museum (yes, that’s a thing) 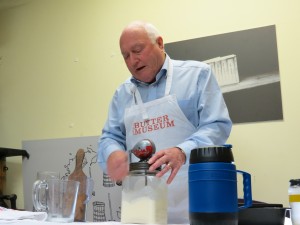 we ventured out to West Cork where we met Clodagh McKenna – chef, cookbook author and TV personality – for a private garden party, complete with cooking demonstrations all using locally sourced ingredients from the nearby village. She’s essentially the Martha Stewart of Ireland (sans incarceration).

Take a look at this (HANDWRITTEN!) menu: 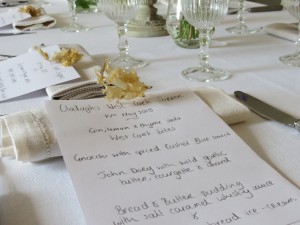 When you think of Irish Cuisine, do you picture this plate? Flower arrangement by yours truly! 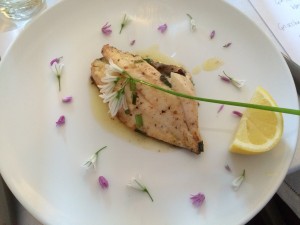 At the end of our first day, I was convinced that the Irish are the just the nicest damn people in the world. The Green family welcomed us into their home at Ballyvalone and Clodagh was convivial hospitality incarnate. Gracious doesn’t begin to describe it. It all became a very personal experience, I felt like family meeting long lost relatives. And dinner was divine.

We spent the next day visiting with the Grubb family at Cashel Blue Farm. The operation there was nothing short of impressive, with innovations at every turn. The warm curd, newly formed was light, fluffy and sweet on the palate – like the most delicate panna cotta you could ever imagine. The curd is then packed into moulds but not pressed to maintain a high moisture level, and ultimately less dense paste. The process is a mix of hands on labour and high-tech computerization. For all my cave apprentice alumni, check this out: With this simple “turn-key” design, you can rotate a dozen wheels at a time! 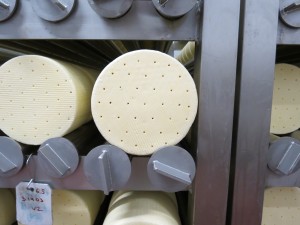 Flipping of the wheels was also automated, encouraging uniform density. The curd is not salted directly; rather the newly formed wheels are only brined encouraging that sweet creamy paste. After piercing, in just two short weeks the blue mold is activated and begins to work its magic from the center of the wheel. 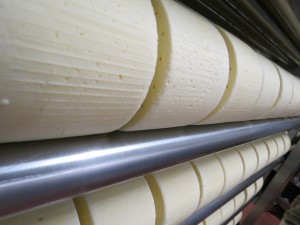 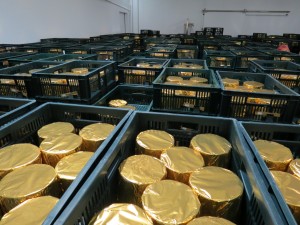 The Grubb family only pressed upon me further the through-line of family and superb Irish hospitality. We were invited into their farmhouse for lunch. One of the family’s favorite recipes is a simple pizza of caramelized onions, rosemary and Cashel Blue. We were even shown the original copper kettle where Mrs. Grubb made the first batch of Cashel Blue! 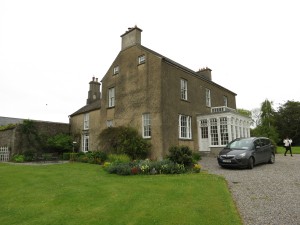 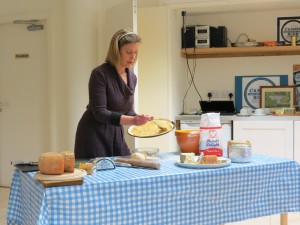 The community assembled at the Ballymaloe House and Cookery School for the third annual Kerrygold Ballymaloe Food & Wine Lit Fest is nothing short of impressive. 10,000 guests descended upon the farm for a myriad of tastings, seminars, lectures, demonstrations, garden tours, and sheer indulgence on a smorgasbord of specialty food and drink offerings. The opening night festivities were ripe with merriment and revelry, bolstered by a sense of like-minded community. We were joined by fellow New Yorkers Garrett Oliver Brewer at Brooklyn Brewery, April Bloomfield of The Spotted Pig fame, and a long list of internationally celebrated chefs, authors and wine and spirits experts. The festival host, Darina Allen buzzed around with youthful energy like a proud mother, facilitating introductions and bridging connections between attendees. Again, it just felt like a big family reunion. 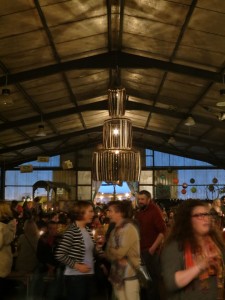 What can I say? I like my whiskey. But as I have never been a big fan of Jameson, I was curious to see what the panel and tasting titled “Irish Whiskey Renaissance” had in store for me. Here’s the flight: 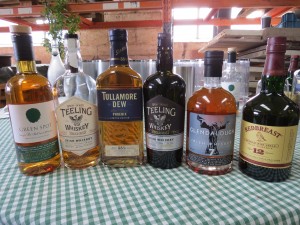 Color me impressed. The whiskeys were delicious, and unique, quaffs worthy of contemplation. The panel, comprised of two Irish distillers and a Scottish whiskey writer/expert was thoughtful and enthusiastic. Outlining the history of Irish distilling (thank you English taxation), differentiating between the pot and column still production methods, and looking ahead to what can only be described as, well, a renaissance, — but the number of new distilleries that will open their doors and their barrels over the next 5 years is incredible, the industry is exploding. Few had anticipated such a growth in global whiskey consumption, and the Irish are vying for their share of the market. If the five bottles we tasted are any indication of quality, I welcome increased availability in the states wholeheartedly.

The “Emerging Wine Regions” panel included popular wine writer Alice Feiring – known for her crusade against Robert Parker and the 100-point sale, among other passionate wine professionals showcased bottles from the Ukraine, (The Best Damn Wine Label I’ve Ever Seen), Greece and unheard of regions of Spain. I found it humorous that these ’emerging’ regions all have rich wine making histories – some thousands of years old. They may be just emerging on the international wine market radar, but they’re established in their history and wine making traditions. Enter a region like New York’s Finger Lakes region, which has only been producing vitis vinefera for 50 years!

Our visit to the festival culminated with the Kerrygold Gala Dinner at the Ballymaloe house. A lovely meal featuring potted lobster, roast lamb, the famed Ballymaloe dessert cart, and of course CHEESE. Speeches by Kevin Lane, OHRUA President and Simon Coveney, Irelands Minister of Agriculture set the tone for celebration by outlining recent successes (removing limitations on milk production, championing Ireland’s agricultural products abroad) and what lies ahead – increasing availability of food and agricultural education, sustainability, and growth of both production and economy.

Ireland is on the verge of a food renaissance, and I couldn’t be more excited to see it happen. While I did not spend any time in Dublin, and never stepped foot in a pub, it was an unforgettable visit. County Cork is a DO NOT MISS part of the country, and I hope to return again soon.

Oh… and we were told maybe 200 times over the course of the weekend – BUTTER IS GOOD FOR YOU. Spread it on!