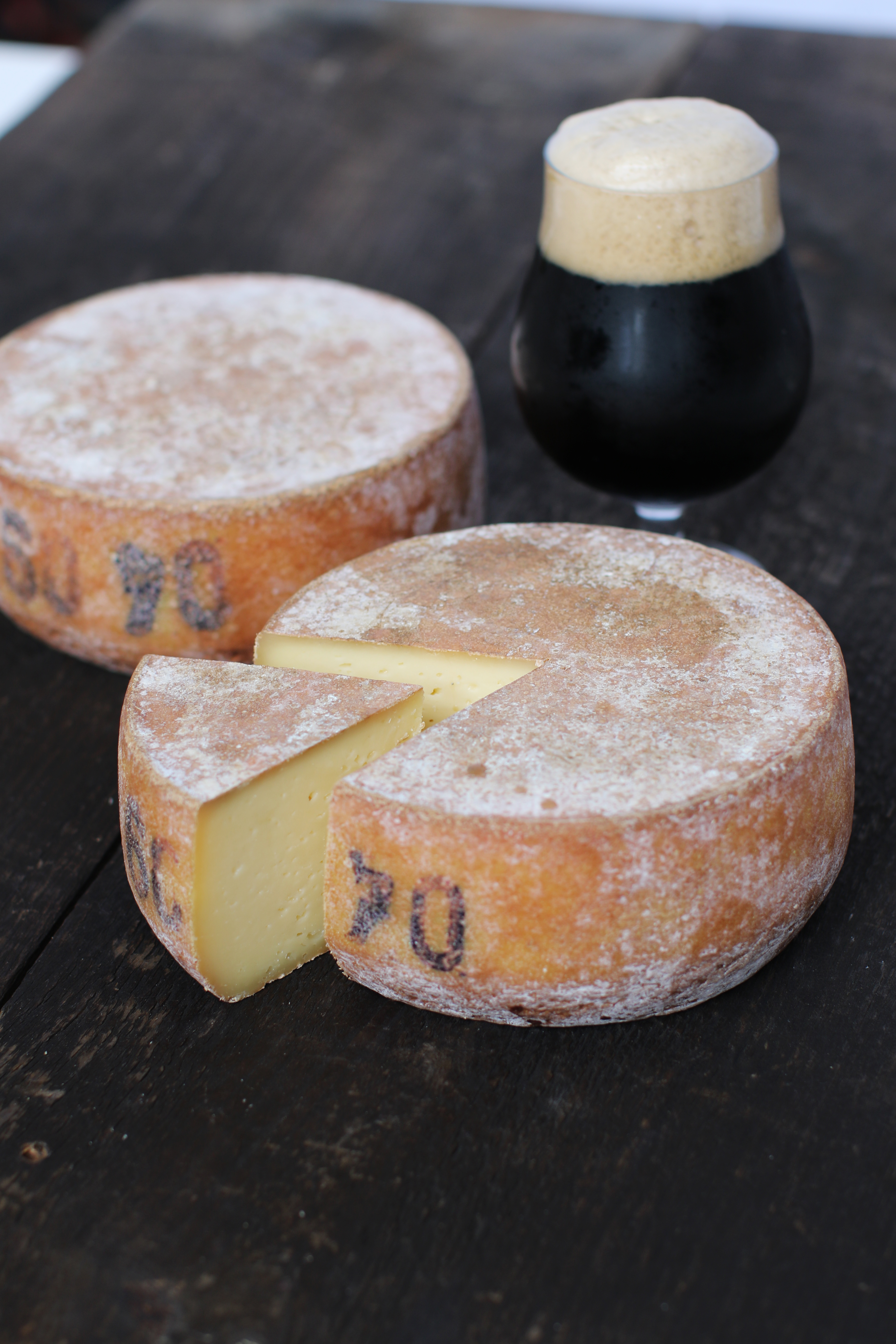 Editor’s Note: This post was written by Josh Windsor, one of our Cavemasters at Murray’s, responsible for the crafting and care of cheeses in our very own cheese caves in Long Island City, NY.

Fending off the cold of winter with a malty, dark ale is both an ancient tradition, and a modern good time. So, when Murray’s partnered with Other Half Brewing Co. to create a limited edition cheese for December, an imperial stout washed cheese seemed like the perfect choice. “Snowbirds Imperial Stout” has everything an affineur (those who care for and age cheeses) looks for in a beer. A strong malt backbone, a robust but manageable alcohol content, and complex flavor profile are the perfect combination to build a wash for a hearty cheese. The result of this experiment is Project Snowbird, a comforting cow’s milk cheese with a brothy aroma and lasting finish. But before we dive into the specifics of this cheese, let us first consider the beer.

The tradition of brewing a winter ale hails from Scandinavian brewing traditions of the Middle Ages. During their celebration of Jul, the Vikings offered dark ales to the Norse god Odin and goddess Freya. Even after the arrival of Christianity, 13th Century Norwegian law dictated that every peasant household brew a Christmas beer or pay a penalty. By the 17th Century, the tradition had migrated to Britain and became associated with the brewing of a sweet, red ale known as a Burton ale. Even Stella Artois—one of Belgium’s most famous exports and whose iconic red star is a symbol of Christmas—started as a seasonal winter beer.

The first Christmas beer to be brewed in the United States was most likely the lager “Salvator” brewed by the Barmann Brewery in Kingston, NY. The tradition disappeared with prohibition in America, and it wasn’t revived until the Anchor Brewing Co. released “Our Special Ale” for Christmas in 1975. Today, the brewing of Christmas ales and winter warmers has exploded. The styles of beer that make up this tradition are as varied as beer itself — from stouts and spiced beers to ales and lagers, the winter brewing tradition is diverse.

As the name may suggest, “Snowbirds” has its roots in the winter warmth of Florida. Other Half is committed to partnering with like-minded breweries to create experimental and limited edition beers, and although they have produced a wide range of styles, IPAs and imperial stouts are their focus. This imperial stout came about as a collaboration between Other Half Brewing Co. (located in Brooklyn) and J Wakefield Brewing (Miami). J Wakefield’s signature beer is the coconut infused Hefeweizen, “El Jefe”, so, it would only make sense that “Snowbirds” would be an imperial stout brewed with coconut, chocolate, and almonds. The final beer makes for a perfect winter warmer (if you can get your hands on it) and tastes like a liquid Almond Joy.

For the cheese, Murray’s chose to work with a raw, cow’s milk tomme from Spring Brook Farm Cheese in Reading, Vermont. This is the same cheese used to produce Murray’s Cavemaster Reserve Project X. The cheese is made in an alpine style, but rather than the massive wheels traditional from the Alps (which can get as large as 100+ pounds per wheel) this cheese is a small format wheel, about three pounds. The wheel style, with a larger surface area to interior ratio than many cheeses, means this cheese is capable of maturing at a faster rate than its larger diameter cousins.

Spring Brook Farm Cheese is a product of Farms for City Kids, an educational foundation that brings urban youth to the farm to better understand agriculture and food production. The cheese that Spring Brook Farm Cheese produces, including Tarentaise and Reading, along with the base for Project Snowbird, help support the foundation’s mission. According to the Digital Giving Index, about a third of all gifts to nonprofits are received in December, and so Spring Brook Farms, with its focus on charity and giving, is an ideal partner for a winter release cheese.

At this point you may be asking yourself, “The beer and cheese sound great on their own, but why would Murray’s wash a savory cheese in sweet, coconut stout?” As previously noted in our Monks and Microbes post, the act of washing a cheese is not about infusing the cheese with the flavor of its wash, but creating an ideal environment for certain microbes to grow. These microbes break down the cheese in such a way as to create a host of delicious, meaty flavors.

For Project Snowbird, Murray’s starts with a green (i.e., fresh and unaged) tomme and washed it once a week in “Snowbirds” with a little bit of salt. The act of washing the cheese keeps the molds that live within Murray’s caves from taking over the rind, and allow a host of brevibacteria to flourish. After a period of three months the cheese is ready to be released. What results is a springy cheese whose light savoriness is balanced with a hint of roasted chicory. And, true to its origins, we think its a perfect cheese for winter, whether there’s snow on the ground outside or not.