Murray’s Cheese goodies are among Food Network staffers’ list of go-to gifts for your Thanksgiving host. 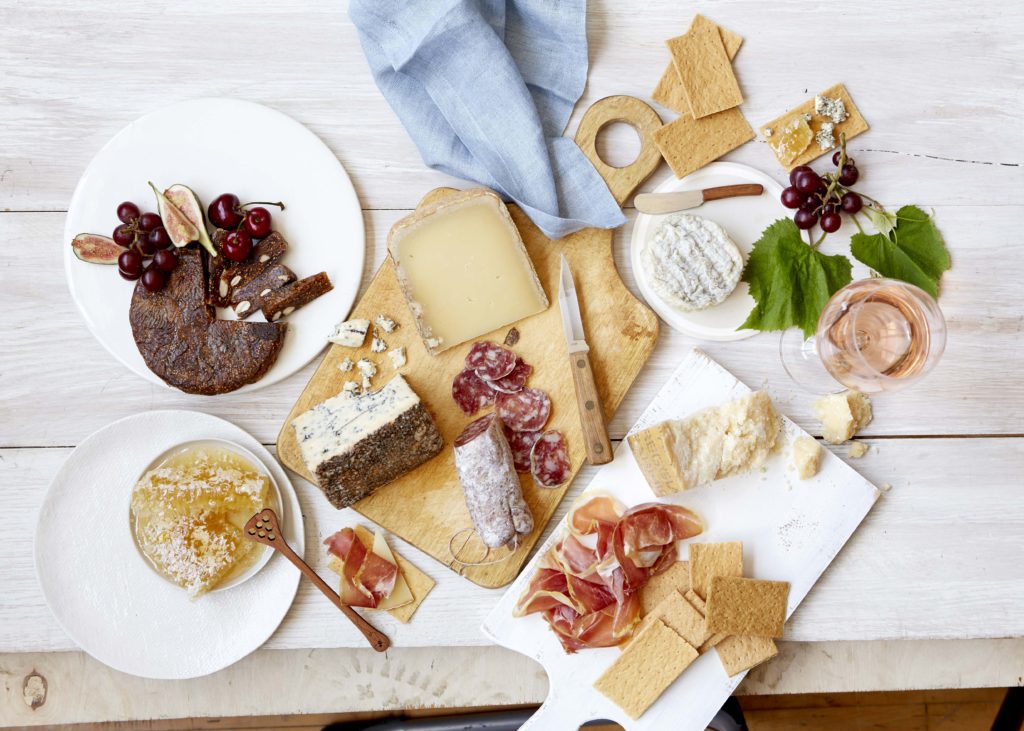 Ed note: Loyal blog readers may remember this story from Hanukkah 2013. We’re republishing it this year because…well, because it’s an amazing story of how cheese saved the day, and we can’t get enough of those.

I can’t think of a better way to celebrate the Festival of Lights better than a big old wedge of curd. Every year, I make the schlep down to south Florida where the whole family gathers to enjoy a week of family time and fried food. And every year I brave the death-stares of fellow travels as I stink up the 3 hour flight with an insane amount of cheese stashed in my carry on. Although in my house I can’t guarantee that these treats will make it 8 days…48 hours would be a real miracle.

Until recently, I didn’t know that cheese, at one time, was part of traditional Hanukkah food celebrations. And just like any food tradition in the Jewish faith, there is a neat little story that will help us rationalize 8 days of gorging ourselves on some fantastic fromage. While this part of the Hanukkah story has become mostly forgotten in modern culture, it’s a great tale of heroism and the perfect excuse to munch on some curd, or gift a little wedge. It goes something like this:

Judith was a strikingly beautiful widow from the town of Bethulia in sixth century BC Israel. Her community came under siege, and annihilation looked inevitable. That is, until Judith came to the rescue. She put together a spread of wine and cheese and entered the enemy camp. The leader, Holofernes, was so smitten by her beauty, he couldn’t resist her offering of ripe cheese and intoxicating wine. He got bombed. I mean really, really drunk, like me at any Bar Mitzvah I have attended in the last 6 years. He was so wasted that Judith reacted in the most natural of ways: she stole his sword and cut of his head.

Jewish heroines really know how to bring the badass.

While this story takes place centuries after the Maccabees and their “Miracle of Light”, for many years it was incorporated into the Hanukkah celebration. Judith’s heroism was celebrated along with the Maccabees victory as an example of the perseverance of the Jewish people. But stories and cultures are not static, and this exciting tale has slowly been abandoned for the the modern Hanukkah story and celebration.

So, now that you know that it is not only acceptable, but encouraged that you get some cheese for Hanukkah, you might want a few suggestions for the platz-worthy wedge. The time and location that Judith’s story takes place would undoubtedly be a land full of goat and sheep milk cheeses. Allison Hooper, from Vermont Creamery, is what many consider the heroin of American goat cheese. She has helped to create the American market for goat cheese, and explored techniques and methods that have helped shaped a quality driven landscape of cheesemakers across the United States. Try some velvety and tangy Coupole or some fudgy and lemony Torus (and a dollop of their Crème Fraiche is a wonderful substitute for sour cream with your latkes). Nutty and grassy Ossau Iraty with a schmear of Seashore Honey will drive your great-aunts taste buds mashugganah, and a beautiful wheel of Cavemaster Reserve Hudson Flower will insure your eternal reputation as a real mensch.

One final piece of interesting cheese and Hanukkah knowledge. You know those potato latkes that Bubbie spends all day frying up? Potatoes were not brought over to Europe until the colonization of the American continent, but Jews had been making fried latkes for centuries. Guess what the original  latke was made of? You guessed it, CHEESE!

Regardless how you celebrate Hanukkah this year, Murray’s hopes it is a fun and full of friends and family. Here is to the festival of lights, and really good cheese! L’chaim, y’all!

Looking for something impressive that’s not oppressive to your wallet? We understand. Thankfully, a little extravagance goes a long way and you can impress anyone with one or two choice, delicious treats. We put together a few indulgent gifts that are luxurious AND affordable.

The Holiday Weekender –  (ON SALE for $55) – A weekend escape full of tasty cheese,     crunchy oat cakes and decadent fig cake. What makes a better gift than a brief escape from the holiday craziness?

American Splendor – $40 – This is a lovely little sack of farmstead American craftsmanship: 2 Vermont cheeses, homemade Apple Butter, and a box of crackers. It makes a great gift for the host of the party, or a foodie friend with a taste for farm-to-table treats.

BYOG– Build Your Own Gift! It all starts with a $15 signature Murray’s gift crate and can be as stuffed or spare as you want it to be. To get the ideas flowing, here’s a sample gift box that costs under $50:

Build Your Own Gift:

La Quercia Cucina Collection – $39.99 –This little package of exquisite, hand-crafted cured meats is ideal for the meat-loving home chef in your life. Made by one of our favorite American artisanal charcuterie producers, La Quercia makes superb prosciutto, coppa, speck and lardo…just to name a few!

Gift Cards –Starts at $10 – These babies make superb stocking-stuffers and last minute additions to holiday cards and thank you notes. Give a little or a lot—they’re redeemable for online, in-store and classroom purchases.

Fancy food treats don’t have to be off limits—we’ve got something delectable in every price-range. Take a look online and place your order, or we’re standing by to help you make selections: give us a call at: 888-692-4339, Monday- Friday, 9 a.m. to 6 p.m. We can’t wait to talk cheese!

Looking for other cheesy gifts this Holiday season? Check out our Gift Guide to see all of our gift collections!

Wanna learn more about cheese? Check out our Cheese 101 videos and become a real curd nerd!

We don’t like to admit it, but we have sometimes play favorite at Murray’s. While we love all of our gift collections, a few are clear standout’s. These are what we would send to family and friends. From the true cheese enthusiast, to those that need a to ease there way in, the following 3 collections should hep you find that perfect cheesy gift.

A Delightful in Every Biteful – Cheese for Beginners has time and taste-tested classics.  A tangy tower of Chabichou, buttery sweet Pyrénées Brebis, and earthy favorite Cabot Clothbound Cheddar share billing with funky Taleggio and fruity Dansk Blue.  These selections are delectable on a cheese board, but versatile enough for a seasoned cheese lover to incorporate into holiday recipes.  A slick cheese knife leaves a lasting impression of deliciousness.

Hey DJ Keep Playing that Song – The Greatest Hits gift is full of crowd-pleasing treats that work equally well for entertaining or as between-meal snacks.  Perfect for the perennial host or hostess, this medley offers comforting favorites like chewy sheep Gouda, crumbly English cheddar, and creamy Dansk Blue.  Crunchy Italian table cheese and decadent goat-and-crème fraiche Cremont round out the bill.  A delicious way to start or end any evening. 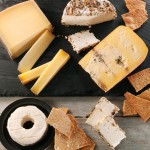 Spelunker’s Paradise – Murray’s Cavemaster Collection is a perfectgift for someone who has tried everything – maybe you know someone who describes him or herself as a “foodie.”  A selection of cheeses that come from our very own caves, these exclusives offer dynamic flavors from the tangy young Torus to the complex Barden Blue, with satisfying textures like dense and crystalline Cave Aged Gruyere and snappy Z Crackers.  The assortment is completed with herb-rolled Hudson Flower – a show-stopping cheese plate centerpiece. Bring the hunt for something new to their doorstep this season.

Looking for other cheesy gifts this Holiday season? Check out our Gift Guide to see all of our gift collections! Wanna learn more about cheese? Check out our Cheese 101 videos and become a real curd nerd!

Stumped by “Secret Santa” This year? Maybe you have to shop for someone that you really like and want them to feel the love. Or maybe you are stuck with the one person who only deserves a lump of goal. No matter who you are secretly shopping for, Murray’s has that perfect gift that will insure that the recipient knows you put some thought into it.

All of these products are available both in our New York stores, and Online. (Insider tip: Click on the picture of the product that fits your Secret Santa needs and be automatically directed to its product page)

Looking for other cheesy gifts this Holiday season? Check out our Gift Guide to see all of our gift collections!

Wanna learn more about cheese? Check out our Cheese 101 videos and become a real curd nerd!