We love the ooey-gooey – that melty delight that is fondue, grilled cheese, and everything in-between. But in your own cheesy experimentation you’ve probably noticed how some cheeses just aren’t as up to turning melty as others. It doesn’t mean we love them any less (I mean, who doesn’t love that crispy crust of Parmesan on a Chicken Parm?) but we know they’re just different. Have you ever wondered why? Don’t worry, we’re here to break it down for you, Cheesers.

First things first, it’s all about the fat! The fat and water ration in cheese determines how it is going to melt. So something that is higher in moisture is usually going to be a better melter than a drier alternative. That’s because the protein structure (which is what keeps the water and fat separated) is looser in high moisture cheeses, and very rigid in dry ones.

So when heat is applied to most cheeses, the fat globules change from solid to liquid, which is when it starts getting that ooey gooey consistency. The protein structure loosens its grip under the heat, and the cheese begins to flow like a thick liquid rather than a solid – think of dripping, delightful fondue, and you’ll have the right idea in your head! 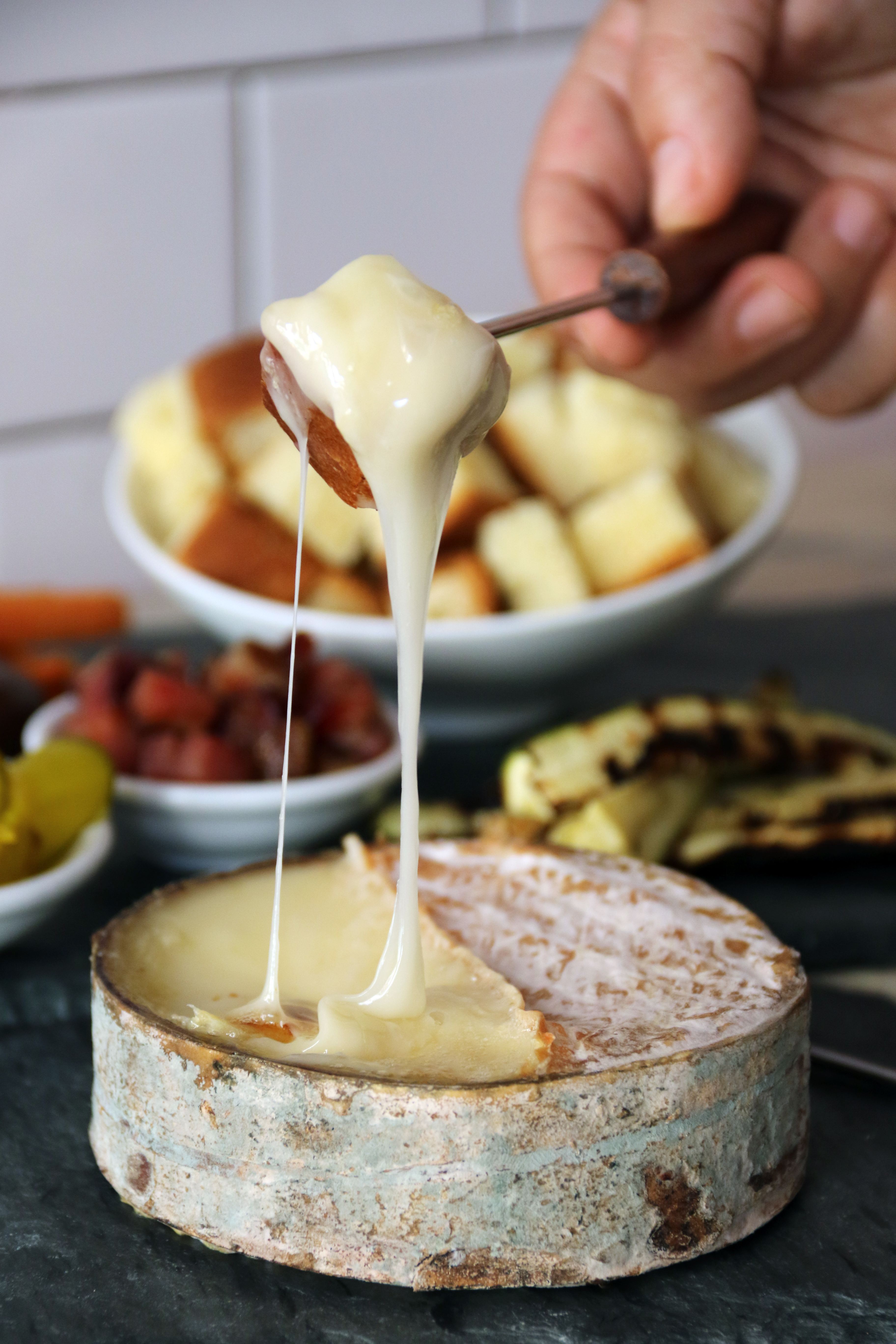 This is why age isn’t just a number when it comes to melting cheese – the age actually means a lot! Freshly made cheeses don’t have that maturity level yet, with their proteins tightly wound up. As they gain a little bit more time, the proteins loosen up, and create a more open matrix (think of it as a net that holds all the water and fat). That matrix is flexible, which is why they melt smoothly and don’t break. But if it ages too much, those proteins tighten up into tough clumps – that’s where that crispy cheese comes in.

So the best melters are a combo of age and moisture – Emmentaler, Gruyere, Comte, they are all well aged, with a flexible protein net. Their high moisture helps separate the proteins without breaking them completely, which allows them to flow into stringy, ooey-gooey meltiness. It totally makes your mouth water just thinking about it, right? Science is so much funner when it’s delicious. 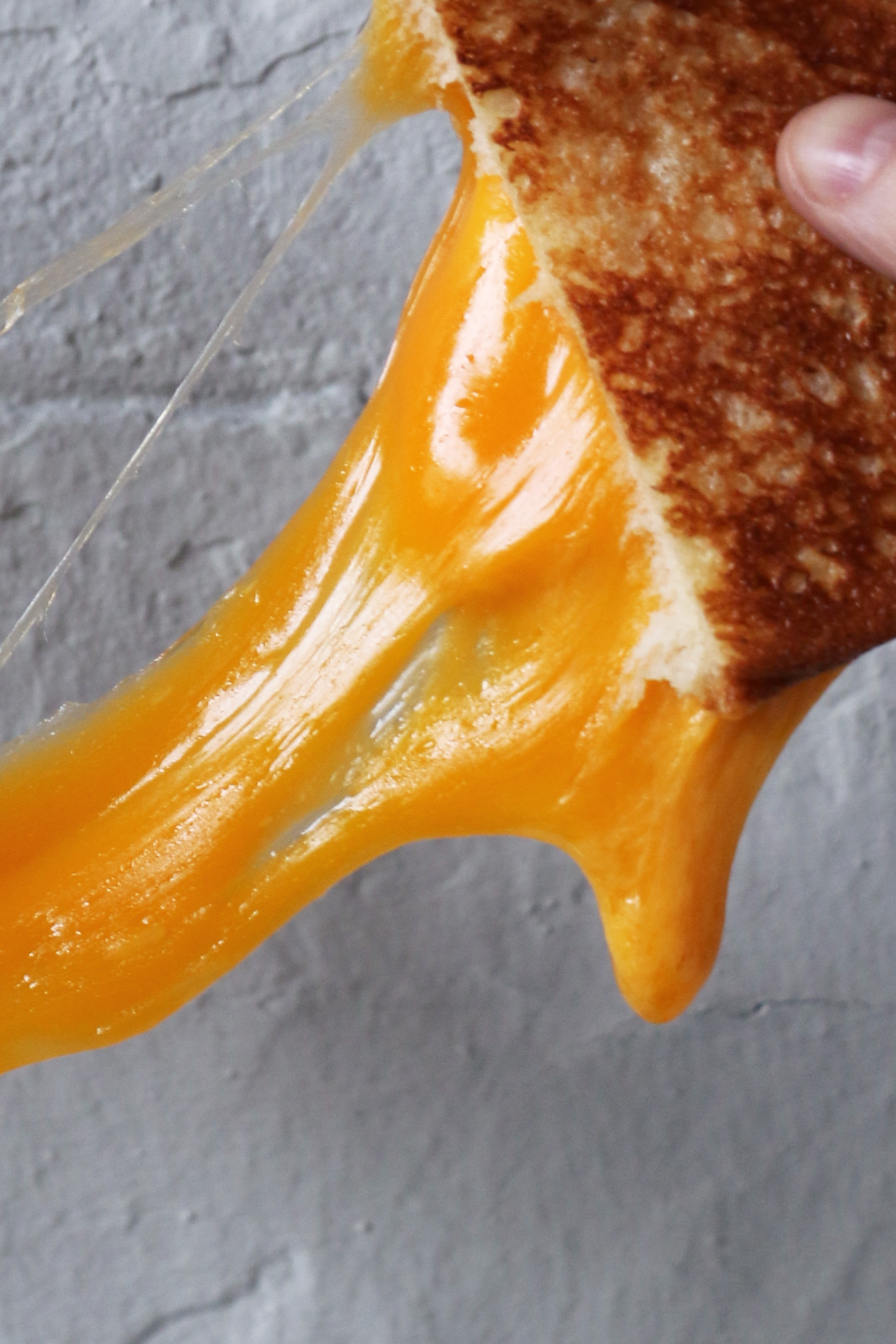 You can hit up some of our favorite melters and get started on your own grilled cheese, fondue, and other cheesy experiments!

Ah, fondue. Some people think of it as the flash-in-the-pot dinner party craze of the 60’s and 70’s, conjuring up thoughts of turtleneck sweaters and expensive gift fondue sets sitting unused for decades. But things are changing for the noble melted cheese dish! With quality cheese more easily accessible to Americans, fondue is experiencing resurgence in a big way and we think this time it’s here to stay. So take a moment to learn a little more about everyone’s favorite communal meal. 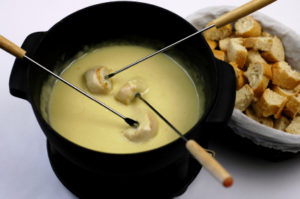 Written records of fondue date back to the late 17th century, when a bare bones version of the dish calling for cheese, wine and bread for dipping appeared in a Swiss cookbook. Fondue showed up in print in various other incarnations through the 18th and 19th centuries, the recipes calling for eggs and often construed as something closer to a custard or cheese soufflé than the hot dip that we know it as today. Towards the end of the 19th century recipes began to appear for an emulsified melted cheese concoction, and in the early 20th cornstarch was added to the bill to more easily stabilize the mixture. Variations on the theme and regional takes still abounded, the idea of fondue as a hot dish for communal dipping took form and became recognizable throughout Europe. 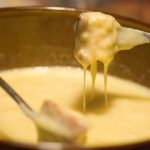 As with most traditional dishes, there is no shortage of regional variations. The well-known Neuchateloise version calls for a balanced mix of Gruyere and Emmental; the Innerschweiz like a blend of Gruyere, Emmental and a spiking of bright Sprinz; the Appenzeller variety uses – you guessed it – Appenzeller cheese, lengthened with warm cream. Whatever the chosen blend, a great fondue is accompanied by cubed bread for dipping, as well as charcuterie and veggies. Can you cover it in cheese? Then ‘due it up. An assortment of pickled or brined treats to cleanse the palate between bites is also a great idea.

If you want to know what to drink with fondue, there are two major camps: Black Tea vs White Wine. Some say black tea is better for your digestion. Some say white wine is in the fondue already, why not also have a glass with the meal?

We say: drink whatever you like – tea, wine, and even beer all make great accompaniments.

Tradition states that if bread falls off a woman’s fork and into the pot she must kiss her neighbor. If a man drops anything into the pot he has to buy a round of drinks for the table.

We say: Anything goes!… Except double-dipping.

Fondue is more than just a meal. The spirit of sitting around a hot pot and sharing a communal meal is essential to the experience and necessitated by the dish. There’s something wonderful about the hands-on element, the light of the flame, and the warmth of the dish that just guarantees a good time.

So ditch the misconceptions and warm your cold winter nights with a venerable bubbling pot of cheesy happiness. We at Murray’s are here to help! 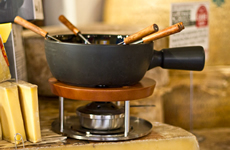 Who isn’t a fan of fondue? On a cold winter night there are few things more comforting than melted cheese, especially when friends and family are gathered around to share in the experience.

And we’ll let you in on a little secret: Fondue is the perfect storm of minimal effort and maximum rewards. A true cornerstone of entertaining for lazy people. It’s so easy that we made three batches in an just under an hour to try out some new recipes, which you’ll find below. What are you waiting for? Get melting!

This is the “classic” recipe most people think of when thinking of fondue. Want to add a little flair to your fondue? Substitute 1/4 lb of any cheese below with a more flavorful Alpine style cheese like Scharfe Maxx, Etivaz, or Vacherin Friborgeois.

Pinch of salt and pepper to taste

Accompaniments of apples, ham, crusty bread, and cornichons will complete your meal.

A funky twist on a classic. The combination of Etivaz, nutmeg and Piri Piri makes this fondue especially rich, flavorful and nuanced in a way that will make people say, “Do I detect a hint of…?” Yes. Yes you do.

Serve with accompaniments of your choice. We like it with roasted Brussels sprouts and potatoes, chorizo, tasso ham, and crusty bread.

If you’re ready to take your fondue to the next level, also known as “The Maxx,” this is the ‘due for you. Bold flavor, silky smooth texture and unmistakable nuttiness.

Serve with accompaniments of your choice. We like apples, saucisson sec, potatoes, roasted fennel or pearl onions, crusty bread, and cornichons.