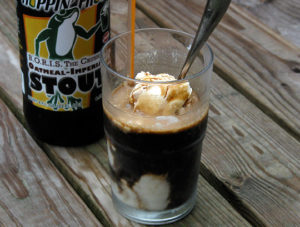 Not the first thing that comes to mind, right?  Who would drop a scoop of chocolate ice cream into pint of IPA or pour a cold one onto a banana split? Garnish their Corona with an ice cream sandwich, maybe?

While I might be on to something with that last one, my point is that the pairing doesn’t exactly leap to mind. Beer goes with the steak dinner, while the ice cream is the cold treat afterwards, right? I mean it’s not like beer works with everything.

I was first exposed to the pleasure of beer and ice cream during a visit to Weyerbacher Brewery in Easton, Pennsylvania. Their imperial stout, Old Heathen, is a punch in the mouth, full of bitter roastiness and intense coffee flavor. I was savoring my fourth sample cup when the bartender suggested pouring it over vanilla ice cream. When I indicated my surprise, she said it was even better with coffee ice cream. My wife and I couldn’t resist and as soon as we got home, we discovered that the bartender knew her stuff. The creaminess of the ice cream cut the bitterness of the beer, allowing the coffee notes to stand clearly on their own, which paired with the vanilla in the ice cream quite nicely.

Now, given the spectrum of flavors available in the brewing world coupled with the nearly limitless possibilities of ice cream flavors, what other pairings work? Surely we can do better than boring old vanilla. (not that there is anything wrong with vanilla., we’ll get to that later)

One of my favorite trends in brewing right now is the ascendance of smoked beer. Smoked porters, pilsners, straight up rauchbiers; I love them all. However, the originals are still the best, and the Schlenkerla brewery in Bamberg has been making smoked beers for hundreds of years. I just recently enjoyed their oak smoked dopplebock, Eiche, which has a milder smoky kick and a rich, chewy sweetness that just begs to be drunk.

So, when I had the pleasure of trying Jeni’s Splendid Ice Cream’s Salted Caramel, I knew I had found a match made in heaven. Sweet, salty, smoky… not just delicious, but alliterative as well. I could also have added creamy and luscious, but that would have broken my S streak. But this sundae pairing shows how satisfying a good savory on sweet pairing can be.

That’s all well and good, I hear you say, but what about that IPA you mentioned in the beginning?

Back in my IPA post, I wrote about Southern Tier’s Oak Aged Unearthly, a shockingly strong IPA that had been de-fanged by a lengthy slumber in an oak barrel. It was the surprise of the tasting, as its lack of hop bite left behind a big, caramelly malt bomb with a solid underlying bitterness. “Pairs well with chocolate,” I wrote, perhaps foreseeing this very problem.

As with any pairing, it’s important to find something with an equally intense flavor that can stand up to the beer. How about Steve’s Brooklyn Black-Out? That sounds intense, let’s see… milk chocolate ice cream swirled with Ovenly’s chocolate stout cake pieces and dark chocolate pudding. So that’s chocolate with chocolate, with chocolate swirled in. Yeah. That sounds pretty intense. The beer and the ice cream work surprisingly well together, with the beer’s bitterness teaming up with the bitter notes of the chocolate while the heavy chocolate sweetness stands out, amplified and accented by the beer’s caramel backbone.

So there’s your IPA and ice cream sundae. Done and done.

But are sundaes the only option? There are so many other ice cream treats out there. What about that most indulgent of sweet treats, the root beer float? It already has beer right there in the name, surely there must be a way to capture that same sweet, creamy, vanilla and spice deliciousness?

The first step is finding a beer with the right flavor and the right amount of residual sweetness to pair with a melting scoop of vanilla ice cream. Left Hand Brewing’s Milk Stout is a perfect choice: The addition of lactose, a sugar that yeast cannot ingest, leaves this stout with a mellow sweetness and a creamy mouthfeel. Add a scoop of vanilla ice cream and you’ve got everything you want: An alcoholic root beer float with that fantastic melted ice cream/beer slurry. A perfect combination for those long winter nights at home.

Beer and ice cream: two great things that go great together. While hardly the obvious pick, a little experimentation will reward you with some surprising flavor combos, as well as a few raised eyebrows when you up end the beer bottle over the giant sundae you’ve just put out.

Ice cream and beer are currently available at our Bleecker location only.