Everyone is talking about Rupert! Rupert has just arrived at our shop and is causing a lot of excitement behind the counter.  Rupert is a raw Jersey cow’s milk cheese from Consider Bardwell Farm in West Pawlet, VT and is named after Rupert, Vermont, one of the state’s oldest towns.  The aged cheese is formatted in large wheels, around 25 pounds, which sport a super cute whale carved into the top.  It’s an alpine style cheese, meaning it’s based on the big guys coming from the Alpine mountains of France and Switzerland like Comte, Gruyere, or Beaufort.  This also means you’ll find the same kind of firm but easy-to-melt texture and similar sharp and nutty flavors in Rupert as you do in those classic cheeses.  I find an added level of complexity in this cheese- sometimes I can taste strong berry notes, other times I taste buttered toast.  Despite the range of flavors this guy tends to be loved by all – nuanced enough for the connoisseur, but never too overwhelming for the more timid cheese lover.   The American Cheese Society agrees – they awarded Rupert 3rd place in the 2009 Best In Show category! 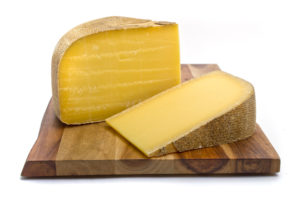 As for the best way to enjoy this award-winning cheese, let me count the ways… Rupert is an outstanding snacking cheese, delicious all on its own, but for those looking to take it to the NEXT LEVEL I have more than a few recommendations.  Alpine style cheeses make perfect melters; one of my favorite ways to eat Rupert is on a classic grilled cheese.  I find the cheese stands out perfectly on its own, sandwiched between two golden brown and completely buttered pieces of sourdough.  If you want to get a little wild go ahead and throw on some bacon or Surryano ham – the smokiness perfectly complements the apricot-like sweetness and cuts through the heavy mouthfeel from the fat.  When I’m trying to go for a lighter route I use grilled vegetables as my vehicle instead of bread- rupert is perfect for grating over charred asparagus and zucchini: it adds a touch of saltiness and a nice gooey layer over the crispy veggies.  If it’s too hot to think about melted cheese, slather on some sweet fruit paste, like membrillo or a tangy plum mostarda.

Rupert’s stand-alone tastiness and versatility makes it one of the best new additions to our cheese case, hands down. Inspired by well-known cheeses, it seems comfortingly familiar, but there’s also something refreshing and unexpected about it – just the sort of thing people look for when they come to Murray’s. It’s the kind of cheese that’s just different and exciting enough to bring out enthusiasm from those who never knew they were cheese lovers.  What are you waiting for? Give it a try!