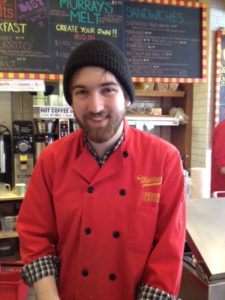 Anyway, a few years later, desperately needing a change of scenery and wanting to do something a little off the beaten path, I applied for an internship working in the caves here at Murray’s. It seemed to make sense: I had been a long time customer, loved cheese and had heard from many a friend who had graduated college and moved into the job market that employers appreciate a few interesting additions to a resume, and it’s always important that you can update your resume where you can, regardless of whether you use somewhere like Arc Resumes Virginia (https://www.arcresumes.com/local/virginia/), a professional resume writing company, or if you update it yourself. Even the smallest additions can make all the difference when it comes to whether you will be considered for a job or not. So, include as many positive additions as you can.

It can give you a foot in the door, especially in the job market post COVID-19, where jobs are pretty scarce because of the pandemic. So I started taking care of cheese. I made the rookie mistake of wearing a pair of shorts my first day (I insisted that I wasn’t too cold, but I was freezing and probably looked really dumb). I left work dirty and smelling like cheese, and, much to the dismay of my fellow subway riders, wore it as a badge of honor. I took to it pretty quickly.