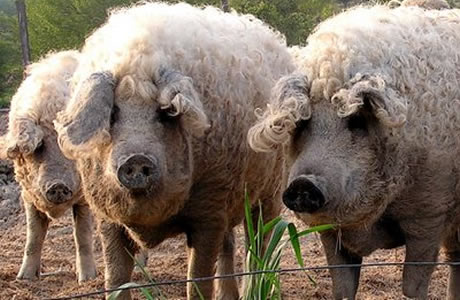 If like me, you grew up finding pork largely unimpressive, it’s time to take a second look at what it was meant to be. In the US, the pork industry has spent years taking one of the most naturally delicious animals in the world and breeding the flavor right out of it. The vast majority of pork on the US market is bred for leanness and consistency, and as such as become dull, boring and predictable. Where’s the flavor? I’ve always struggled to understand why “the other white meat” would be a good thing. Heritage breeds like Mangalitsa and Berkshire will take your love of pork to the next level – and show you that this meat is in a class of its own. 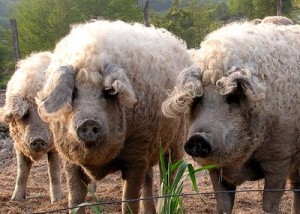 Mangalitsa
Originally bred to be eaten only by Hungarian royalty, Mangalitsa still maintains a flavor that will make you feel like a king. If you’ve ever had Hungarian salami, you know Mangalitsa: smoky and rich, substantial in flavor and in texture. More and more, these fine pigs are being bred domestically. The meat is far too dark to ever be called “white meat,” and marbled beautifully. Don’t be turned off by the presence of a large amount of fat – these pigs are known for their fat and in many places raised especially for it. Mangalitsa lard is high in monounsaturated fat and oleic acid, making it lighter, cleaner, and yes, healthier. (Mind you, we’re not labeling lard a health food, but if you’re going to eat it – and let’s face it, you’re going to – it’s definitely the healthier option)

The Mangalitsa breed was saved from extinction in the latter half of the 20th century through the work of a group of Eastern European farmers who revived the breed from 200 surviving purebreds. Today they are becoming more and more widely available, though due to their substantial requirements for food and space it is still a skilled farmer who decides to raise a herd of Mangalitsas. Lucky for us, Mosefund farm in New Jersey is doing just that, and you can get a taste the heritage difference with their fantastic bacon. 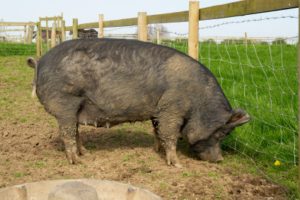 Berkshire
Perhaps the most well-known of the heritage breeds, Berkshire pigs originated in Britain where, you guessed it, they were first bred to be consumed by the royal family. They have been bred now for over 300 years, and with good reason – Berkshire meat is sweet, rich and incredibly juicy.

Berkshires were first brought to the USA in 1823 and were initially assimilated into the general pork population – luckily they were rescued from a future of mediocrity in 1875 when a group of breeders who recognized the importance of keeping the breed pure established the American Berkshire Association. Look for the “100% Pure Berkshire Pork” label – this means the producer is a member of the association. Olli Salumeria combines Mangalitsa and Berkshire pork to make their phenomenal salami.

These are just a few of the awesome heritage breeds on the market in the US today – and it is well worth the effort to seek them out for all your pork consumption needs. You’ll never look back!