You’re still looking for a gift for the holidays, huh? Don’t worry, we’ve got your back. Giving the gift of cheese is pretty much the in thing this year, and we’ve got a gift for pretty much everyone. It takes a single gift to transport your loved ones across oceans with some of the world’s greatest cheese. First stop? Italy.

It’s no secret that Italians do the whole eating thing right. Especially when it comes to cheese and meat. In this collection, we’ve hit up all the classic cheeses you think of when Italy is brought up – nutty Fontina, sheepy Pecorino, and spicy Gorgonzola, of course. Fontina Fontal is the epitome of the Italian table cheese, perfect for snacking with its supple paste and sweet, nutty flavor. You’ve most likely had Pecorino before – this Italian classic takes many shapes and forms, but the one we love most is hearty, crumbly, and full-flavored. The Gorgonzola is Mountain Gorgonzola, which is firm, sliceable, and delectably tangy with a hint of earthiness. Throw in the creamy La Tur, and it’s a full spread of all the amazing cheeses that Italy has to offer.

And then there’s the meat. The Italians invented salami – perfecting the process of preserving meat through salt, cool temperatures, and time. Murray’s own Sopressata is a classic salami derived from Italy’s most popular recipe, a combination of coarsely ground pork, garlic, salt, and freshly ground pepper. Our Speck is a smoked, full-muscle cut similar to silky Prosciutto, and aged in an herbed crust made up of juniper, thyme, sage, and fennel. Both pair well with the briny, peppery Castelvetrano Olives and crunchy Tarallini Crackers that accompany the gift pack.

It’s La Dolce Vita – the Sweet Life. And there’s nothing sweeter than giving cheese for the holidays. And receiving it, too!

Sean Kelly is our all-star monger who will be competing at the Cheesemonger Invitational this Saturday! Don’t forget to VOTE FOR HIM on Facebook!

At Murray’s when we think of summer cheese we think FRESH! While we always love our stinky, nutty, firm and aged cheese friends, fresh cheeses go with warm weather picnics and sunlight like an oyster stout pairs with a strong washed rind. (Hint: that is an awesome pairing) But who is the undisputed king of the fresh cheeses? The noble mozzarella, of course.

Mozzarella is a proud member of the pasta filata, or “stretched curd”, family of cheeses, meaning that the curds are kneaded together, stretched, and re-kneaded repeatedly until the desired texture is achieved. It’s this process that is responsible for mozzarella’s stringy consistency and lively, bouncy texture. The stretched curd family of cheeses branches out into several other groups as well, and includes provolone and caciocavallo. But mozzarella will always be the cornerstone of the style, and now that summer is finally here mozzarella season is in full swing.

What better time to better know your mozz? Here are a few of our favorites for the season.

Meaning “buttered” in Italian, burrata is comprised of a thin sheet of mozzarella filled with fresh curds and cream. Burrata originated as a way for cheesemakers to utilize the leftover curds from the cheesemaking process and, like many foods with exceedingly practical origins, it has become one of the best options out there. Maple Brook Farm, who makes rich, fresh and traditional burrata, learned their technique from an Italian cheesemaker from Puglia, in the heart of mozzarella country. If you think the idea of a cream and curd-filled mozzarella pocket bears a striking resemblance to some sort of criminally decadent dessert, you’re not alone. We love serving these bundles of delight with a drizzle of aged balsamic vinegar for a savory sundae.

A far cry from the behemoths you may have seen on the back of a nickel, the Italian water buffalo is a dairy animal known for producing incredibly rich and flavorful milk perfect for cheesemaking. Buffalo milk is the traditional milk used for Italian mozzarella making, and Torre Lupara farm has been doing it since 1946 with a herd of 2,000 buffalo. Buffalo mozzarella provides an extra savory kick, tang and depth of flavor that makes it perfect for adding a layer of richness and moisture to just about anything. We love it in a BLT (a BBLT, if you will) instead of mayo. Or, if you have no sense of shame and love delicious things, just eat it whole, like an apple!

The classic standby for cooking and snacking, cow’s milk mozzarella has a very special place in America’s culinary heart, particularly here in New York City. Made fresh in Brooklyn by Lioni Latticini from whole cows’ milk, this mozzarella embodies traditional Italian flavor while maintaining a commitment to locally sourced ingredients and careful attention to detail. This cheese absolutely begs to be toasted atop a meatball hero or paired with paper thin prosciutto for a smooth and salty snack. If you’re tired of the same old-same old tomato/basil/mozzarella combo, try this fruity variation: mango/mint/mozzarella. 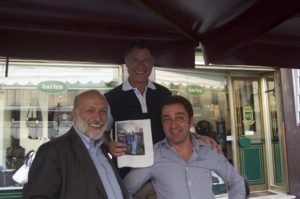 Murray’s Grand Central Store Director, Will Whitlow, took a trip this October to Salone del Gusto in Northern Italy. On his trip he made a stop at Quattro Portoni, one of Italy’s premier water buffalo farms.

What comes to mind when you think of Italian cheese?  The great cow’s milk cheeses like Parmigiano-Reggiano?  Or the thousands of sheep milk pecorinos?  Eventually you will probably think of mozzarella from the south of Italy.  But is it really made from water buffalo milk?  You can’t imagine how often we’re asked just that.  Yes, the large, black, big-horned and wooly creatures produce astounding milk for cheesemaking.

Last week, I visited a unique farm in the province of Bergamo in Lombardy called Quattro Portoni.  In the last 10 years, the Gritti brothers, Alfio and Bruno, have transformed their family’s cow dairy into one of the standout water buffalo dairies in Italy.  Located in the heart of the Taleggio-making area, they were looking to distinguish their farm from those that sell milk to the big cheese plants that surround them.  Bringing the southern tradition of water buffalo to the north was exactly the right choice.

Quattro Portoni, or Four Gates, is named after the 13th century gates into their moat-encircled town of Cologno al Serio.  And a couple of their new, modern cheeses carry the names of those ancient, individual gates…Casatica and Moringhello.  Quadrello is their spin on Taleggio, the classic cheese of their region.  It’s creamy, sometimes gooey and always rich and a bit pungent.  Gran Bu, the big buffalo, is just that, a physically big and big flavored firm cheese with sweet and nutty overtones.

One thousand water buffalo live on the farm.  Of those, 270 are being milked for cheesemaking.  Since water buffalo only give about two gallons of milk per day (cows can give up to four gallons), it takes many more water buffalo to have enough milk for a thriving cheese business.  Everything from breeding to calving happens on the Quattro Portoni farm, and most of the crops they feed the buffalo are grown there too, with the addition of some of the spent barley from the beer producer down the road. Theirs is a fairly self-sustainable operation.

The day of my visit, the pristinely clean and shiny cheesemaking room was busy with 2 cheesemakers and 4 helpers making Blu di Bufala, their cube-shaped blue with light veining, a rich, fatty mouthfeel and a minerally tang at the finish.  The buffalo had been milked at 4pm the previous day and 4am that morning.  The milk from both milkings was pasteurized and in the vat by 6am.  They work in three small open vats because buffalo milk is a bit more delicate and feeble than cows.  It’s easier on the milk to work it in small batches.  The milk for Blu di Bufala is coagulated and cut in the vat, then the curds are drained on worktables (the whey is used for fresh ricotta).  Once the curds have drained, they are cut into slabs about 1″x3″x8″ and layered loosely into the forms.  This is a laborious task and all of the cheesemakers and helpers must work together quickly to get all of the curds into forms.  Once all of the forms are full, they will rest for a few hours, be flipped twice and left to sit at room temperature overnight while gas is produced inside the “wheel” making little spaces for the blue to grow.  The following day, they’ll be flipped again and brined.  About 120 wheels were made from this batch and they are now aging in the farm’s temperature and humidity controlled aging rooms.

This is old-school, hands-on cheesemaking.  The cheese plant down the road making 100 times more cheese has the same number of cheesemakers.  Machines cannot make cheeses like those produced by Quattro Portoni.