The first British settlers arrived in Jamestown  in 1607, bringing hope – and hogs. The pigs were left to their own devices, rapturously descending on the wild nuts and acorns scattered throughout the lush Virginia woodland. 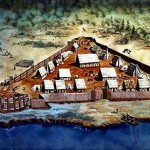 By spring, the Jamestown colonists were keeping their hogs on an island just across the river from the Jamestown settlement. The pigs loved roaming through the thickets and streams, and the farmers could rest easy knowing they wouldn’t wander away. The island soon became known as Hog Island, and still is today, over three centuries later.

But well before English colonists came ashore, and before their hogs rooted through the swamps and sea-meadows of Virginia, Native Americans inhabited the area, smoking, salting, and drying wild fish and game, taking full advantage of that which the forests and ocean bountifully provided.

With the help of the natives, these early colonists adapted their meat preservation techniques to fit their own needs. They began rubbing the pork with salt obtained from evaporating seawater, forcing out the moisture from inside the meat, prohibiting the growth of harmful bacteria.  They finished the hams by smoking them over hickory and oak fires and leaving them to age for up to a year.  These cured hams proved to be a reliable source of income for the colonists during a time when the prices of cotton or tobacco could fluctuate wildly from season to season.

In 1926, S. Wallace Edwards, the young and affable captain of the Jamestown-Surry ferry, began selling ham sandwiches to his passengers. The ham had been cured by him, according to their generations-old family recipe, on the farm that carried his family name. Before long, the demand for his hams let him quit the ferry business and cure meat full time, eventually growing his business to a nationwide operation.

Surryano ham is still made according to the time-honored family recipe: cold-smoked for seven full days and aged for another 18 months.  The Edwards family treats their heirloom six-spotted Berkshire hogs with the love and attention that their forbears would lavish upon their own livestock; after roaming the pasture all day, they get a rich, fatty dessert of raw Virginia peanuts.

That diet and exercise lends a deep, mahogany color and nutty flavor to the amply marbled meat. The smoke adds a stunningly complex depth to the palate, complimenting the flavor of the pork without overpowering it. The plentiful streaks of taupe fat melt on your tongue and coat your mouth with flavor.

While Surryano can be melted on a flatbread pizza, rendered for a savory pasta dish, or even wrapped around melon, the true appreciation for this meat can only be achieved by eating it straight – one perfect, smoky slice at a time.

Combine 2 ½ cups flour and salt in a stand mixer. Mix on low with a dough hook and add the eggs one at a time. Slowly add the oil. Finish by adding the rest of the flour until the dough forms a ball. Wrap the dough in plastic wrap and rest for 30 minutes.

With a sharp chef’s knife, cut the Surryano into small squares. Mix with Parmigiano-Reggiano and Cloumage in a mixing bowl.

Remove the dough ball from the plastic wrap and cut it in half. Dust a large portion of your counter with flour and form each half into a rectangle. Feed it through the pasta machine two or three times before reducing the setting. Continue until the machine is at its narrowest setting. The dough should be paper- thin.

Lay out the dough on the floured counter. Brush half of the sheet with the extra egg yolk. Spoon a tablespoon of the Cloumage filling onto the pasta, about two inches apart in a grid.  Fold the other half of the pasta sheet over and use your fingers to push out excess air around each mound to form a seal.  Use a knife or a crimper to cut out each ravioli.

Melt the butter in a sauté pan over medium heat until the milk solids separate and begin to turn brown. Add the garlic and thyme and lower the heat. Cook for about a minute and remove the sprig of thyme.

Cook the ravioli in salted, boiling water for 4-6 minutes. Serve with the brown butter sauce. 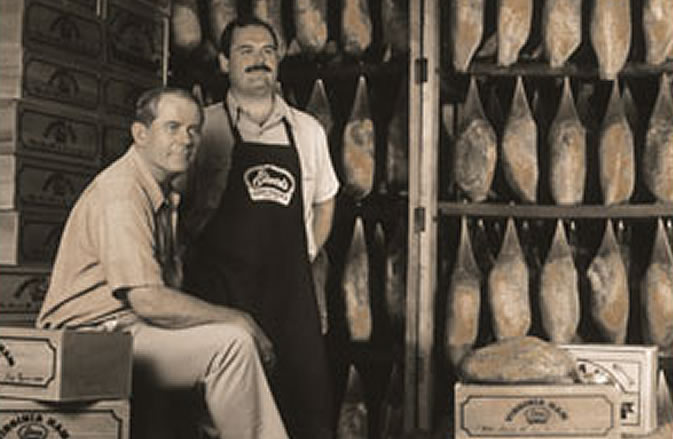 Virginia has its own rich culinary traditions with hundreds of years of practice to back them up, but recently products from the state have truly come into their own. In everything from cheese to charcuterie, Virginia is turning out some of the best artisanal foods their side of the Mason-Dixon and, indeed, anywhere in the country.

Tucked away in the highlands of Virginia, Meadow Creek Dairy is the picture of small production and sustainability. Meadow Creek has been nominated for awards and recognized on the basis of not only their phenomenal cheesemaking skills, but also aspects such as “good animal husbandry” (i.e. humane and responsible treatment of their animals) and their refusal to use pesticides in the pastures or in the animals’ feed. As a result, this dairy produces seasonal cheeses that change with the environment and are direct descendants of the rich land from which they came. Their Appalachian, a natural-rind, tomme style beauty, and Grayson, a buttery and pungent washed-rind that recalls Taleggio or Livarot, are prime examples: both cheeses glow a bright, straw-like yellow color (indicative of healthy, grass-fed cows) and boast complex earthy, vegetal flavors that can only come from naturally and expertly produced cheeses. 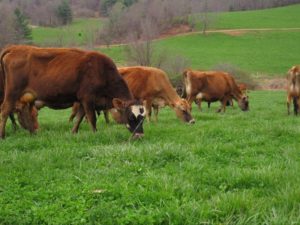 Many “purists” scoff at the mere idea of an outstanding cured ham coming from anywhere other than Parma, San Daniele or the Iberian Peninsula. Poor, poor souls…

Enter Surry Farms, a 3rd generation collection of cure masters that takes the tradition of breed-specific cured meats and puts a distinctly American spin on it. Surry Farms makes their wide range of products, from bacon to hams to guanciale, with 100% purebred Berkshire hogs raised completely outdoors in and around the area of Myrtle, Missouri. When they arrive at Surry, these hams are perfectly marbled, rich in color and flavor, and simply beautiful. However, their journey has just begun. The cure masters take these hams and dry cure them, smoke them over hickory for 7 days, and age them no less than 400 days to produce their signature meat, the Surryano Ham. We’ve recently procured a few legs of the coveted peanut-fed Surryano that is even more silky and delicate than the original!

What do you get when the grandson of an Italian salumi master discovers the pristine pasture-raised hams of Virginia? You get an exquisite line of prosciutto and salame proudly produced in America with traditional Italian methods and values, that’s what. In 2009, Olivario Colmignoli and Charles Vosmik sat down and sought to accomplish just that. Olivario (Olli) had been working for a U.S. subsidiary of his grandfather’s salumi business when Vosmik posed an important question: if you know the techniques and have the resources, why don’t you just make the products here? A week later, Vosmik procured several Berkshire hams for Olli, and the pair went to work. The result was phenomenal, and Olli Salumeria began to take shape. Now, among their line of cured hams, Olli has expanded to make several traditional regional Italian salamis that highlight both traditional European methods and prime Virginia ingredients. Their Norcino, Napoli, and Calabrese salamis all embody different regional Italian flavors while letting the rich Berkshire pork take the spotlight.

While hams and cured meats seem to dominate the foodscape of Virignia, accompaniments can’t be overlooked. Virginia Chutney Company makes amazing chutneys and jams that borrow from a wide range of traditions. The company’s founders Clare and Nevill grew up in East Africa and England, respectively, and met in the Caribbean where they began to make chutneys together. The duo moved to Virginia and have been making a spectacular line of sweet, spicy, salty, fruity deliciousness ever since. Their latest creation, Preservation Society Pepper Jelly made from red, green, jalapeÃ±o, and habaÃ±ero peppers, brings sweetness, heat, and a perfect pairing for meats and cheeses.

Check out all of these great finds in our new Virginia State Fare collection!