Bock beers: Big, sweet, malty, rib-sticking beers that were originally made to wrap up the brewing season. The name comes from the town of their creation, Einbeck, which was eventually bastardized into bock, which is the German word for goat. So which cheese to pair with them…  Goat cheese, of course! Oh the puns we’ll do!

First I had to select my beers. I immediately reached for Troeg brewery’s Troegenator dopplebock: a big, sweet, strong (%8.5 abv!) dopplebock with intense dried fruit notes and a dangerous amount of drinkability. This is about as true to the style as you can get. Quick note: the suffix of –ator always denotes a dopplebock, which is a shout-out to the first dopplebock, Salvator, produced way back in 1773. 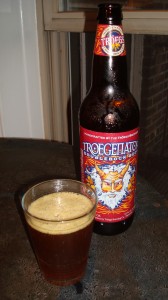 For the second, I went a little out there and selected one of Sam Adam’s new limited release offerings called The Vixen. It’s a bock beer brewed with cocoa nibs, with an added spiciness of cinnamon and chilies. Now having read all that, I wasn’t prepared for the flavor: Rich, roasty, but with more coffee in the body than chocolate. The chocolate only appears in the finish with the barest hint of spice. Where the Troegenator is a perfect example of the classic style, Vixen takes the basics and runs with it. 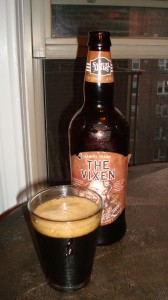 For my cheese, I knew that I had to go with some big flavors, as the heavy sweetness of a bock would clobber anything too mild. When pairing it’s always key to match intensities: strong with strong, mild with mild. The goal in all of this is to find two things that join up, work together, and become more than the sum of their parts. I selected an ooey, gooey Brunet, with its big goaty tang and assertive bite, as well as two washed-rinds: Consider Bardwell’s Manchester and Tomme de Chevre Aydius. 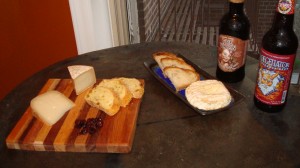 Some of the pairings were sublime, while others swayed into the inedible. Good news first! Troegenator with Brunet worked together fantastically. The intense, almost bitter cheese filled in as the hops for the beer, while the sweetness of the beer enveloped and mellowed out the cheese. They filled in each others gaps and emerged a delicious, complete beer/cheese hybrid of decadent yumminess.

The other big winner was a big surprise and is a bit of a challenge to put into words. The Vixen, with all of that roasty complexity, went so well with the Tomme de Chevre Aydius that we couldn’t stop eating it. I wish I had bought more! The two married so well, with deep bready, nutty notes emerging that weren’t evident in either the cheese or the beer on their own. Truly one of those sublime pairings where a completely new experience emerges, transcending its individual parts.

Now the bad news. Some of these pairings are definite no-gos. Brunet, which went so well with the sweet and intense Troegenator, turned almost noxious with the Vixen. “Like a shot of rancid liquor,” as my wife put it, waving her hand in front of her mouth as if to ward off the flavor. The roasty notes in the beer, which can sometimes take a bitter, molasses-esque tone, joined up with the bitter notes in the cheese to crush all joy out of the pairing. Avoid! But where did this leave the Manchester? Forgotten, too mild to stand up to either beer and getting utterly lost in the mix.

It can’t be said enough: When thinking pairings, make sure both parties can stand up to each other. When you match strengths, individual flavors won’t get lost. If you’re lucky they might even combine to create something delicious and unexpected – just one more reason to keep experimenting and tasting at home!

Kevin Brooks is a monger and merchandising specialist at Murray’s Cheese. He’s on an eternal quest for the “third flavor” and the “perfect burrito.”