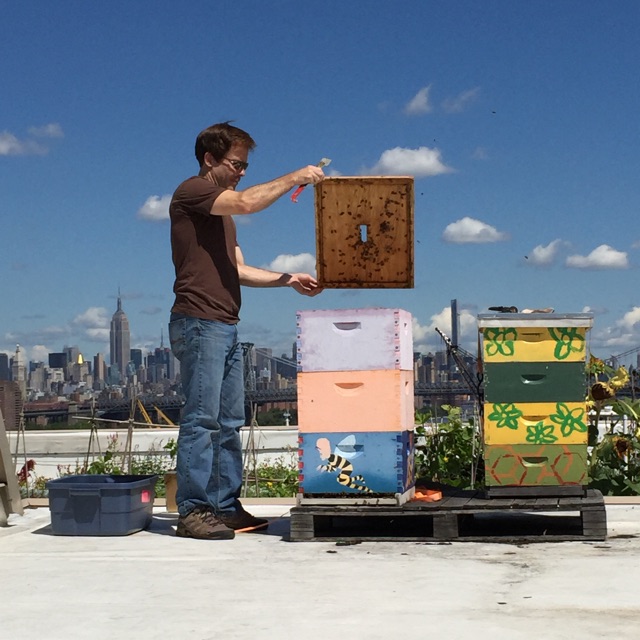 Quick Editor’s Note: Honey week is September 8 – 13! Come celebrate (and learn) with us at our honey class, or bask in some delicious honey at home. We visited Brooklyn Grange, the leading rooftop farming and intensive green roofing business in the US. Christine writes about the epic trip:

I’m pretty sure I took more notes at Brooklyn Grange than I took in most of my college classes. Chase was a wealth of knowledge about bees and the business of bees. Asking him a question was delightful, because he’d grin, take three seconds to think about it, and then answer not only that question but also the three next follow-up questions I had wanted to ask. He is passionate about keeping his bees and knowing all he can about bees, and we all were trying to soak up as much of that knowledge as we could in the short amount of time we were there. 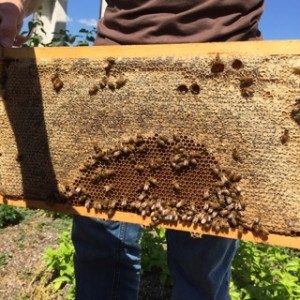 One surprising thing he mentioned is that most people consider city honey to be dirtier than honey from rural areas, but that’s usually not the case. Rural areas often have crops that are sprayed with pesticides, which can get into the honey. In the city, however, most of what the bees eat is pollen from plants growing in parks, none of which is (usually) sprayed. In New York City, most of our urban honey is made up of pollen from linden trees. Even if his whole 65,000 square foot rooftop farm were covered in bee-friendly flowers, he said that it would only be 1% of what one hive needs in a season. Much like cheese, a lot of the feed goes into keeping the animals alive and healthy before it can go into creating that delicious byproduct.

My favorite part started when he pulled the frame out and brought it over to us. He invited us to push our fingers through the honeycomb to try a bit of fresh honey. We did. Remember that moment in The Wizard of Oz where everything goes from dusty black and white to ultra-vivid technicolor? That’s what that honey tasted like—that first vivid moment of color. It had a fullness of flavor that I hadn’t experienced in honey before, even delicious raw honey. 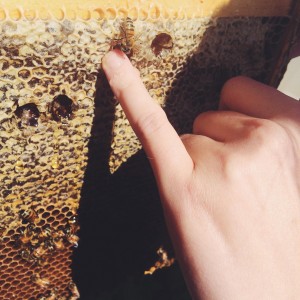 Then, he said “you know, if you have some honey on your finger and put it next to one of them, they’ll lick the honey off.” So, I tried it. Sure enough, the little drone I cautiously put my hand next to sauntered up to my pinky finger and calmly began licking the honey off me. For her, it was just a cleanup on aisle four, but for me, it was lovely and adorable.

There were other fascinating aspects, like learning about tax breaks for green roofs and how bees turn nectar into honey and how they stay cool in the winter but really the most memorable part for me was when I got to pet the bees. Or did the bees pet me? 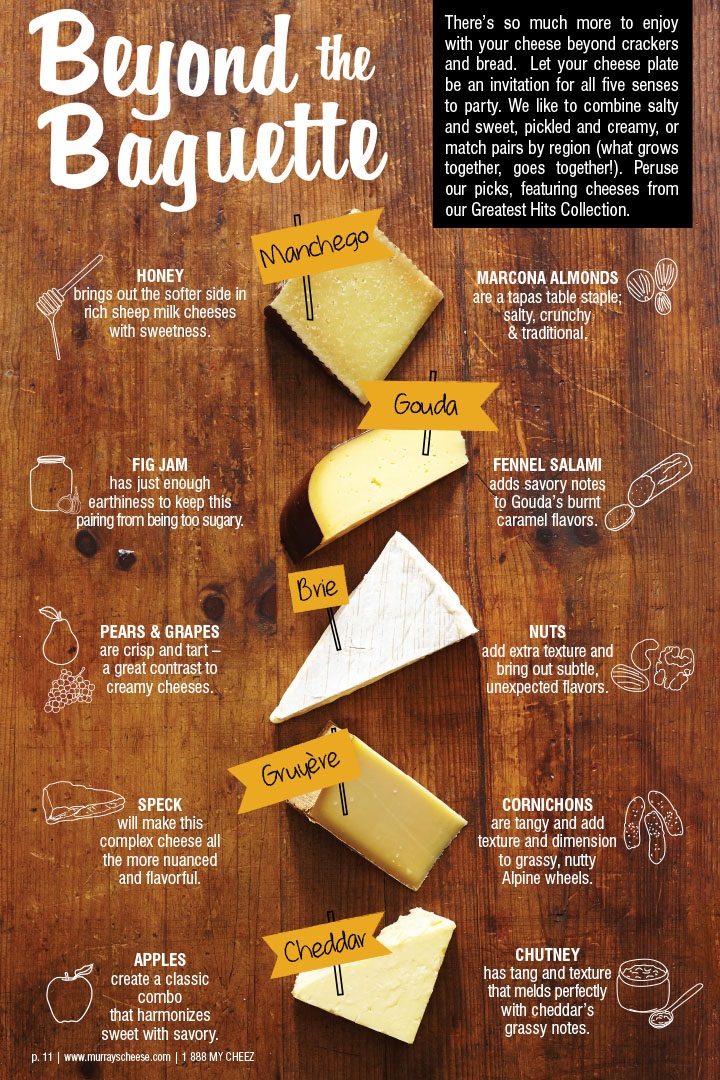 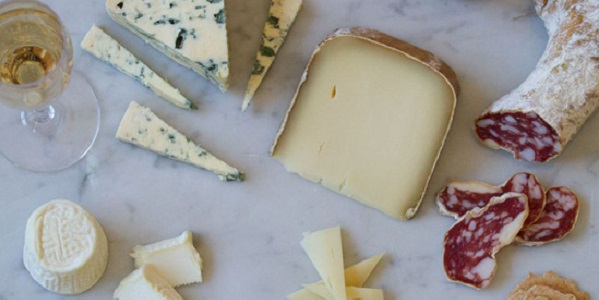 It’s entertaining season, and the king of the Murray’s classroom, Dan Belmont, recently shared with Gotham Magazine his top 10 cheese entering tips. Here are some of our go-to’s:

You don’t want a plate of three different brie-style cheeses, or all blues for that matter. You want to create a progression from mild to intense flavors featuring a variety of cheese styles, origins, and milk types. When selecting each component for your board, remember that texture should be balanced, too.

2. Light-bodied reds go with everything.

Pinot Noir is probably the most versatile food-pairing wine. Try selecting a lighter bodied one from a cool-climate region like Burgundy or New York’s Finger Lakes. A good Pinot will be herbaceous, earthy, and fruity with good acidity. Heavier wines like Barolo or Bordeaux don’t play as well with certain molds.

Honey will always have a home with Blue cheeses, playing off the sweet and salty combination and its thick texture is luxurious on the palate. Fig jam works with just about anything, while strawberry preserves are a knockout with a nice alpine-style cheese like Comte. Get creative and try a caramel sauce or chocolate for your Goudas, Cheddars, Bries, and even Blues!

Head on over to Gotham Magazine to read Dan’s full list!

We all know the stress of preparing a perfect Thanksgiving meal. This year, try a different approach. Instead of offering to prepare the stuffing or cranberry sauce, offer to bring everyone’s favorite dish: CATERING! If you’re in New York City, be sure to check out Murray’s Catering offerings and talk to our Catering team (Leigh, Sarah, and Beau), who can hook you up with everything but the bird. 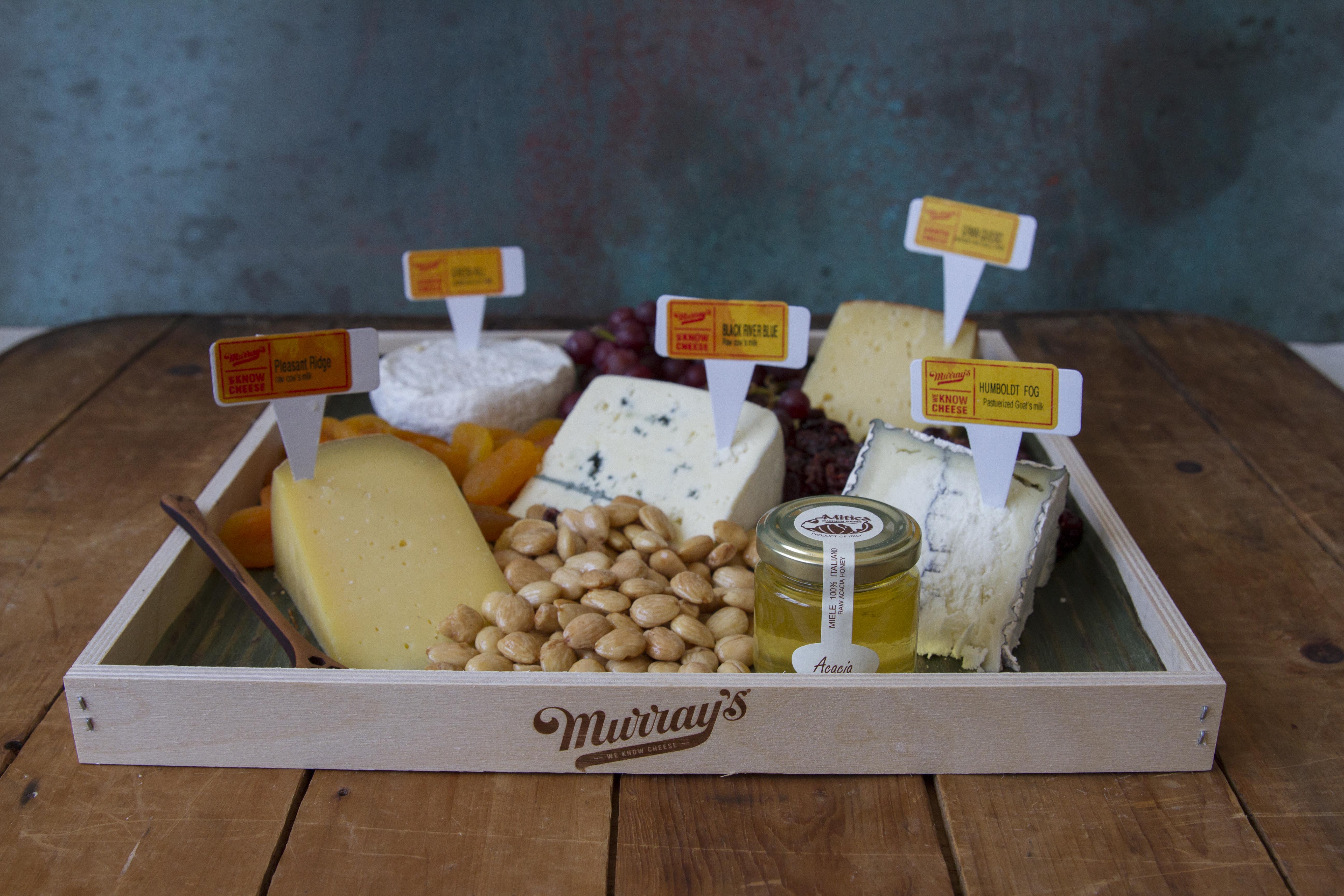 Our go-to platter: cheese! The best part about bring cheese to your Thanksgiving gathering is the Murray’s Catering team who can help you assemble the perfect cheese board that will have all of your guests forgetting that turkey is even a thing. The “All American” spread pictured above celebrates American cheese, and includes 5 of our all-time favorites: Humboldt Fog, Green Hill, Solo Gran Queso, Pleasant Ridge Reserve, and Black River Blue. Serve these with honey, Marcona almonds, and dried fruit for something to be truly thankful for! 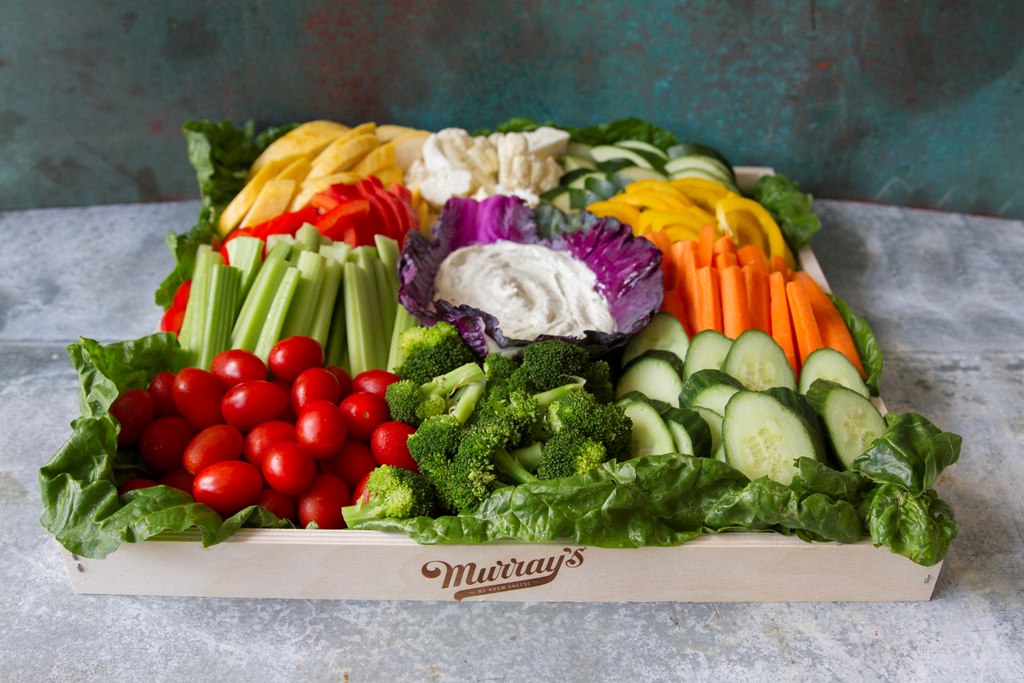 Looking for something a little lighter to nibble before the big event? The catering team is also well versed in the world of small bites. Their beautiful Crudite platter features their famously addictive garlic-herb spread made with bright and tangy fromage blanc.

Overwhelmed by rich desserts? After the turkey, sides, and all the trimmings, a slice of pie might set you back another belt loop. Instead, take a break from the table, and set out a tray of bite-sized desserts and chocolates for your guests on your coffee table. Full of flavor and the perfect size to nibble on while lingering over coffee. Offer an assortment of mini tartlets, mini brownies, petits fours, and caramels, and let people help themselves to the bounty!

We don’t mean to toot our own horn, but we feel we must tell you: Murray’s Brie Baker is going to be your favorite part of the upcoming holiday season. Follow our easy recipe suggestions and you’ll have an impressive appetizer or dessert in just 15 minutes! 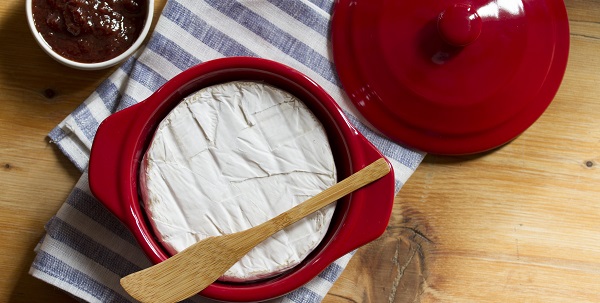 Here are some classic combinations for the holidays: 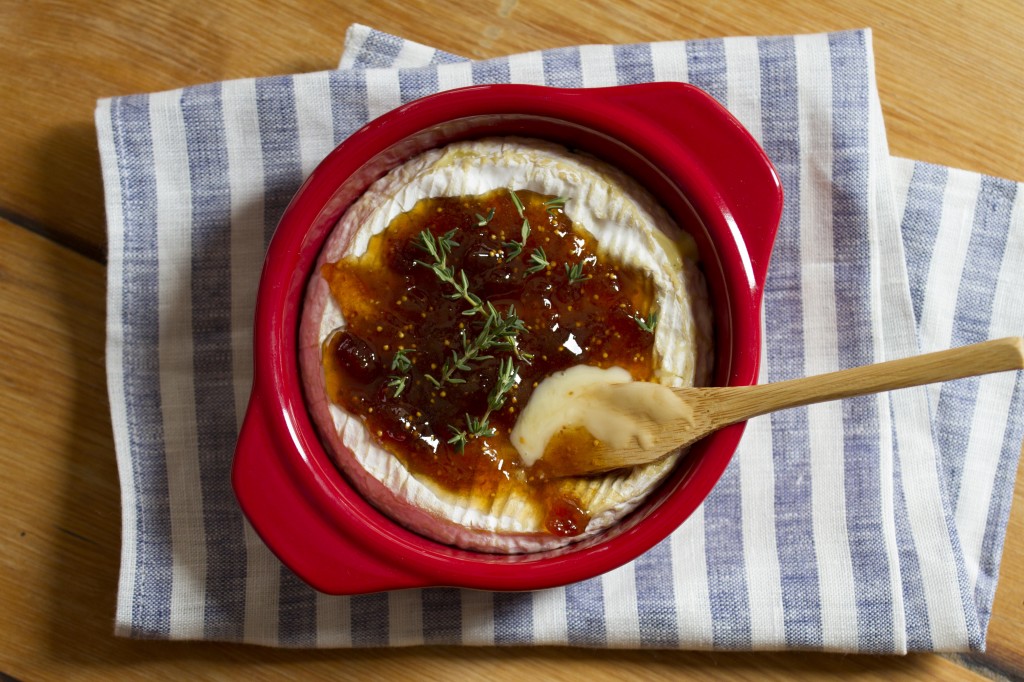 Simple:Keep it simple and top your baked brie with fig spread, honey, or strawberry jam. Really, anything spreadable will work! 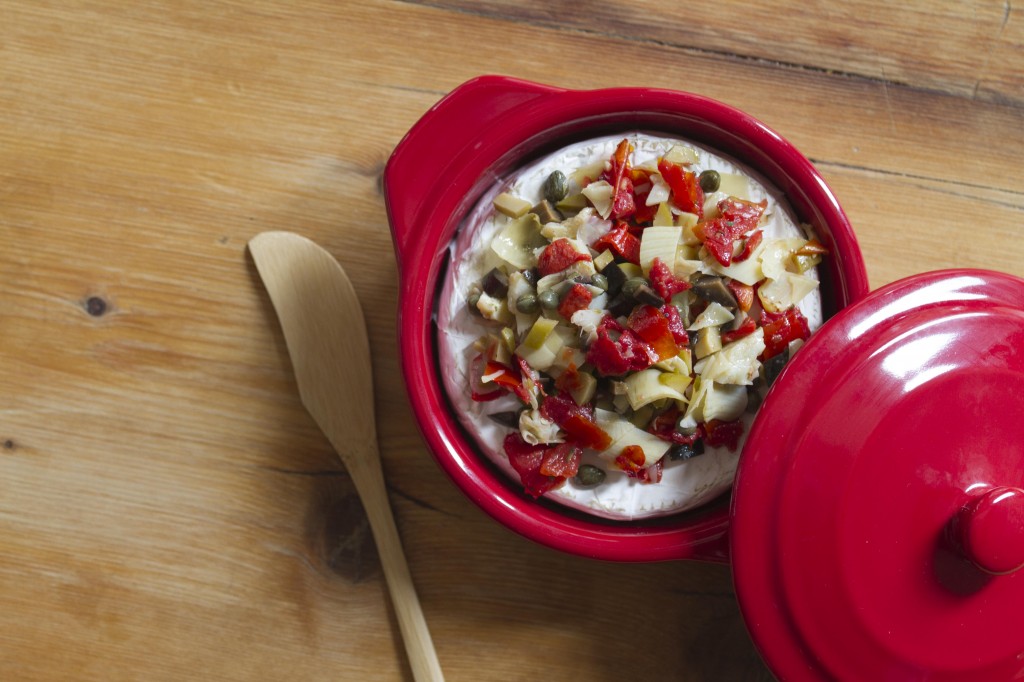 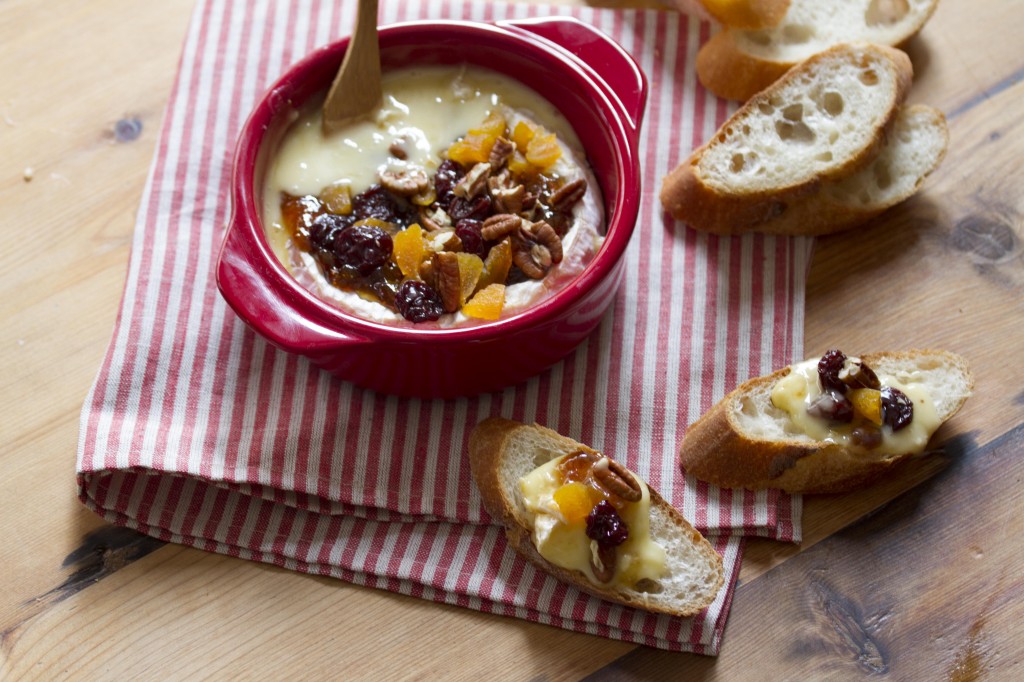 Here’s what to do: 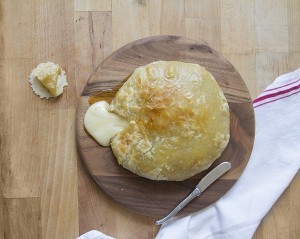