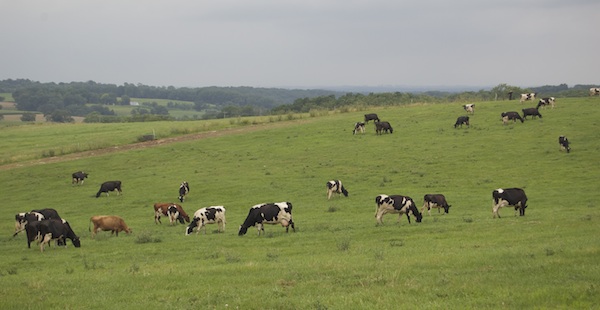 Late last week I had the chance to catch-up with Rob Kaufelt, the owner of Murray’s, to chat about the current state of the American cheese industry. Rob has had his fingers firmly at the pulse of the international, and American cheese market for the last 20 + years.Rob has seen American cheesemakers pop up across the country, and has played major  role in these small producers sucess on American cheese counters. He shared a few interesting words with me on the past, present, and future of what American cheese looks like. With October being American Cheese Month, his words seem especially important…

When I first judged at the annual American Cheese Society conference – I think it was 1990 – there were around 75 cheeses entered in the competition in all cheese categories. I’d say about a dozen were good. This year there were almost two thousand entries and my staff members that attended said maybe three dozen were notable.

The good news is we have seen the birth of the artisan cheese movement in America reach adolescence. The bad news is that, like many adolescents, the industry has a lot of growing up to do. We need to learn how to make good cheese consistently and safely. We need to market our cheeses better. We certainly need to educate our customers if we are to move them away from industrialized crap to the cheeses we love. And  we need better production methods and distribution to help bring costs down so more people can afford the good stuff.

The best news is that the word is spreading, and those of us that chose this rather strange career, whether as makers or mongers, have reason to be proud of what we’ve done, and to eagerly anticipate what we will do in the future.

In 2013, these words ring especially true. This year we have seen tighter FDA and USDA standards, and pressure on American cheese makers to adopted greater safety standards. Internally at Murray’s, food safty was a major buzzword this year. As we grow to become a national cheese retailer, understanding every possible thing we can do along the supply chain to insure the saftey of our product is viewed as critical.

Education is a major facet of the cheese industry, that starts at the retail level. And down at our flagship on Bleecker Street, we are taking big steps to expand our cheese education mission  by building a second classroom space! This will allow for a more diverse curriculum, and allow us to continue to educate American cheese lovers.

Over the next few years, we plan for Murray’s to fufill the mission Rob layed out 20 years ago. We want to be the household name in cheese. While doing so, we are excitied to continue selling and promoting the many American producers we have grown to love over the years, while picking up some new ones along the way.  October and American Cheese Month is the perfect time to reflect on how far American cheesemakers have come, and the exciting  future that is right around the corner.