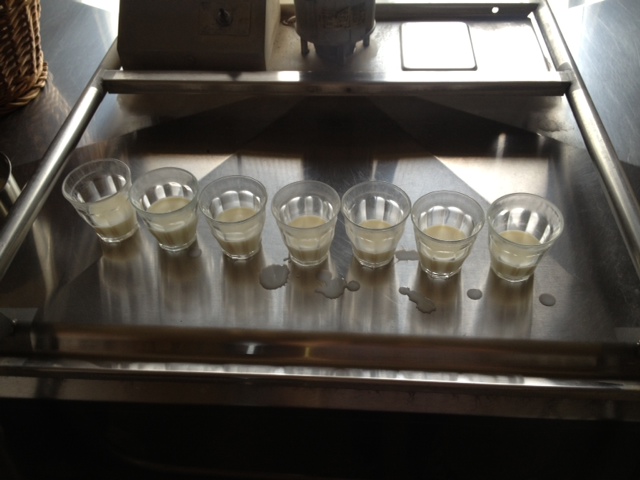 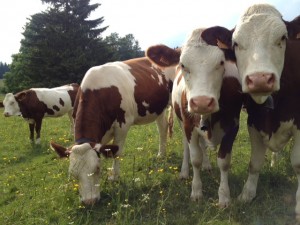 The Montbéliarde is an elegant, pampered cow.  Covered in wide swaths of dappled chestnut brown and cream, she is the foundation of Comté, the source of the raw material that will, when transformed, become cheese.   She is cared for, fed, by farmers across this countryside, making her way gracefully through the bright landscape of the Jura Massif.

The first step in the three-part chain of Comté, the dairy farm is crucial for the production of the best quality raw milk.  Under the set of regulations for the cheese’s Protected Designation of Origin that maintains the tradition and quality of the cheese—known here as the cahier des charges—a farm must provide an animal with the right environment that will make the best milk to be made into cheese.  In the Jura, this means that Montbéliarde cows, required by law to constitute 95% of the milk used for Comté, must have their own grazing area—1 hectare, to be precise, made up of the plants that make this region so full of biodiversity.  Under the cahier des charges, these lucky ladies can graze on pastures filled with grasses and flowers native to these high hills, part of the terroir that speaks itself in floral pops and verdant flavors of a wheel of Comté.

In the winter, and during especially dry summers, the cows will eat hay, dried from the spring and summer before and stacked high in bales in the barn.  Jean-François, our farmer friend at Villette-les-Dole, is especially proud of his hay.  He encourages us to climb a ladder and see!  See how the air circulates, the hay dries, la griffe (a large, scary-looking claw-like machine whose name seems to escape us all in English) distributes to the Montbéliardes, who graze now in the hot summer sun but line up in our imaginations during the chilly months, always choosing the same spot in the barn.  He grabs big handfuls of le foin and le regain, the first and second cuttings of grass for hay, and waves them under our noses, explaining the concentration of tall, waving stalks of grain in the first and the lower, buzz-cut of grasses and flowers in the second.  Jean-Francois’ son, Max, steps up and quietly, romantically, tell us that when they are cutting hay, the village smells of it, this foin and regain, and if you sleep with the windows open, you will dream of hay that night.

High up in the Jura Mountains, now in the Doubs region—next to the Jura, and included in the designated area of Comté production—this landscape 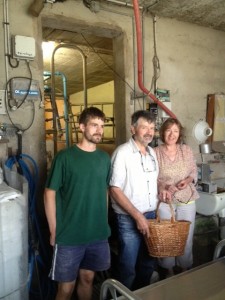 of dusty yellows and flat plains gives way to a second plateau.  Moving our way higher in altitude, the temperature has dropped and a new microclimate is immediately evident—broad pines surrounding wide, sloping fields brimming with some of the 576 grasses and wildflowers so engrained in the sense of this region’s terroir.  After a lunch of Comté fondue—more on that later!—and potato rÃ¶sti, influenced by the Swiss border just a minute or two away, we walk the property of a classic chalet.  No cows are milked here, but Norbert practices the ancient art of shepherding—he is a berger, here in these hills to take care of a 60-head herd of local farms’ heifers between a year and a year and a half.   We tramp through hip-high waving grains and stop every few minutes to identify flowers in some pidgin French-English-botanical Latin language—gentian, whose roots Norbert carves into small, bitter bites for us to taste, the basis of the local liqueur,  daisies, local native orchids, clovers of all colors, small buttercups, native herbs.

If this level of specificity seems, well, specific, it is.  Consider the result—raw milk, as it must be raw milk, held no more than 24 hours between milking and cheesemaking, teeming with microflora that will contribute to the vast array of flavors and aromas in a wheel of Comté.  Jean-Francois, clucking at our American pasteurization, explains “le Comté, il est fabriqué avec lait qui vit;”  Comté is made with living milk.  The French—and this story takes place, ironically, less than a kilometer away from the birthplace of Louis Pasteur—carry with them their microbial convictions, believing that the bacteria in the air, in the land, on the udders of the cows being milked, are the living, breathing foundation of great cheese.  A ladle of this morning’s raw milk makes us believers—a little sweet, like a wheat field in the sun, the dried grassiness of hay, and just a touch of clean animal—it’s the pure illustration of the land we walked and cows we (I) bumped heads with.  A drizzle of raw cream over a fruit tart is just insane.  Ridiculously indulgent, rich, so thick it seems almost cultured, like liquid crème fraiche. 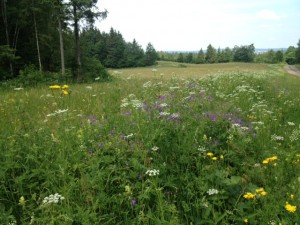 From these hills and plains, cows and the people who tend them, comes milk, complex and ready for the next step in its journey to becoming a wheel of Comté—onward to the cheesemakers, the fruitieres that take this primordial liquid and transform it, into cheese.