Folks have only been brewing beer and noshing on cheese for oh, several thousand years or so, and we’re not about to argue with millennia of delicious history. Sometimes flavors just work together, and bready, refreshing beer has always been delicious with cheese – after all, there are as many different beers in the world as there are cheeses. We’ve asked some of favorite beer-loving cheesemongers just what cheeses and beers are a match made in heaven.

But what makes a perfect pairing? Actually, there’s some simple rules when it comes to figuring out what pairs with what. We at Murray’s follow three simple rules:

With these pairing types in mind, let’s check out some of our favorite beers with Murray’s best cheeses! 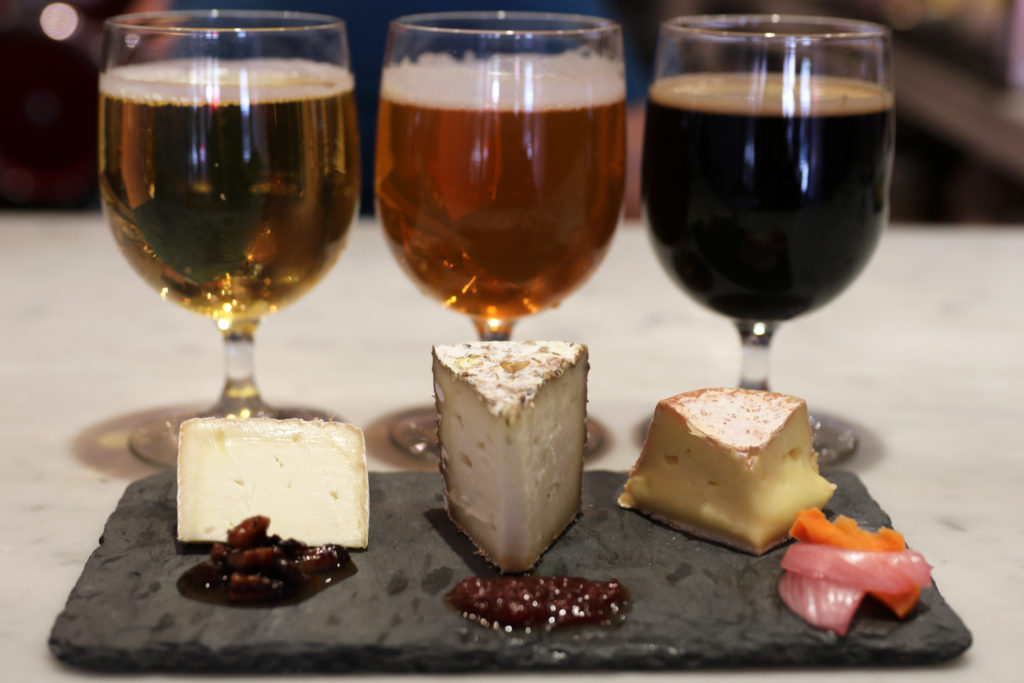 There’s something just right about a bright, creamy cheese and a light, dry beer. Take, for instance, the local buttery batch of St. Stephen. Delicate, buttery, with a hint of sun-dried wheat and sweet cream under a pillowy rind, it is a versatile cheese that works best with something bubbly. Normally, you’d be reaching to pop a bottle of Prosecco to go along with it, but we suggest instead Reissdorf Kolsch. This Kolsch is light (lighter even than a pilsner), with a minty, hoppy aroma that gives way to flavors of vanilla and gentle cedar notes. It’s a unique mix, but just as delicious as any wine and cheese pairing.

What if we could recreate the best tastes of a sweet breakfast, but with cheese and beer? Well, with the creamy, toasty, and buttery Murray’s Camembert, we’re part of the way there. This Frenchie’s earthy notes are balanced with a frosty glass of Logsdon’s Seizoen Bretta. Unfiltered and sealed with beeswax, the beer is refermented, producing a fruity and spicy beer with a soft malt character. It is dry and crisp, like champagne, which makes it the ideal partner to a creamy, gooey Camembert.

If you’re looking for traditional beers, Aventinus is the way to go. The world’s oldest wheat dopplebock, it was created in 1907. It is full-bodied, like any dopplebock should be, with malty notes that linger between raisins, plums, and marzipan. Often paired with roast beef or chocolate desserts, it made sense to break out a chunk of Annelies. This Swiss sweetie is full of flavors of roasted hazelnuts and vibrant alpine grasses. Beneath those, undertones of butterscotch and cocoa are brought out with each swig of the Aventinus.

An award-winning cheese from the homeland of American cheese, Wisconsin, Pleasant Ridge Reserve takes on the flavors of the Alpine classics that it is inspired by. Its younger wheels are reminiscent of beef broth and caramelized onions, while the more aged version tends to embody more floral, crushed pineapple notes. While this is a new cheese born of ancient traditions, we paired it with a beer that dates all the way back to 1628. A Belgian monastery was brewing this style of trappist beer since the 17th century, though it was revived for public consumption in 1931. Light and foamy, it has the distinct aroma of aged leather and spice, and tastes a bit fruity with a bitterness that accents the oniony, beefy flavors of the cheese.

Blue cheeses are often considered overpowering – this Spanish blue is admittedly quite bold and spicy. Valdeon is made with a seasonal blend of goat and cow’s milk, then wrapped in a protective layer of sycamore or oak leaves. Hearty, it requires a strong, distinct beer to pair alongside it. This is where Sagra Bohio comes in – birthed by brew master partnered with an acclaimed Spanish chef. We’ve always encouraged pairing dark chocolate with our piquant blue cheeses, so pairing Valdeon with Sagra Bohio is a natural choice. The lightly smoked ale is full of bitter chocolate notes and espresso aromas.