This is the barn at Consider Bardwell Farm in West Pawlet, VT. 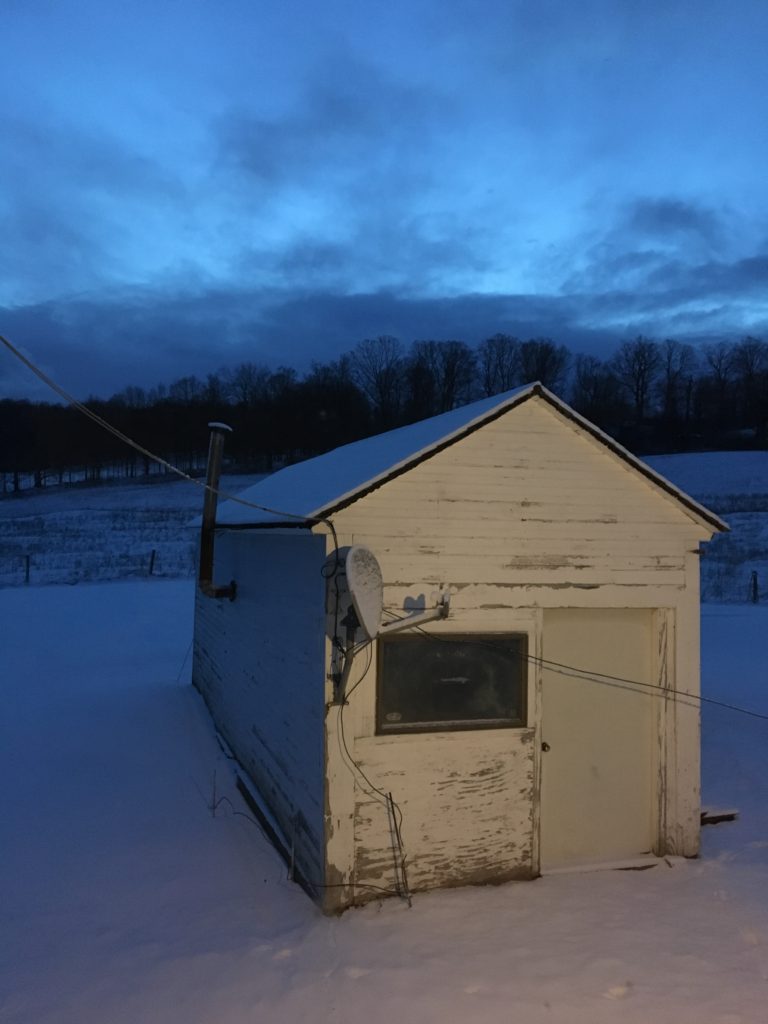 Wait. No. That is a shed outside of the guest house at Consider Bardwell Farm. This is the barn. 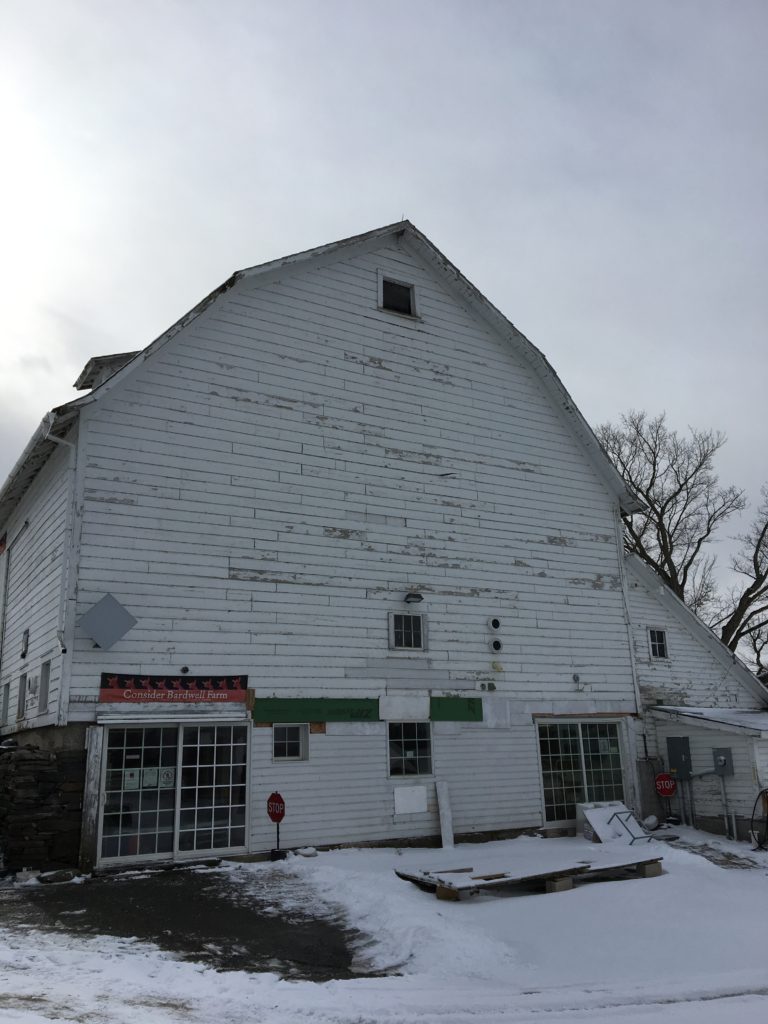 It’s amazing how much barns have changed compared to what places like True Blue Sheds offer now. Typically the barns I see now are made of metal and are far more industrial, while this is more rustic and old fashioned. This is because a pre-engineered metal building, for example, will last a lot longer than a wooden one. They are also a lot quicker to build and are can be insulated a lot better than their wooden counterparts, meaning they will save a lot of money in the long run. Just check out some of the impressive steel buildings iowa that are being used for a range of agricultural purposes as well as providing somewhere for the manufacturing and processing of food products to take place. There are very few of these old types of barns in operation nowadays, but I’m getting ahead of myself. I’ll leave that part for a little later. Still, the shed photo is instructive. Notice the color of the sky? It is very early in the morning. Certainly earlier than some of us who visited the farm a couple weeks ago are usually up and ambling at. Some of us are rather delicate. And though we aspire to be up with the sun, reading the paper and leisurely making breakfast in a skillet, and have even made several valiant attempts at realigning our circadian rhythms via sleep-tracking apps and tonal lighting around the house, some of us’s idiot bodies stubbornly refuse to cooperate with such well-intended actions. It could also be down to the fact that most of us have recently read this Sleepify Review about how good a Noa Mattress can be for our sleeping patterns, and if we’ve gone on to buy one, we will probably find every excuse in the book to not get out of bed until we really need to. And so we remain delicate.

But it is also not every day that we are invited up to Vermont to make a batch of Murray’s very own Cavemaster Reserve Barden Blue cheese, so we gladly jump at the chance and wake up early with almost no complaining at all.

What is Barden Blue? It’s a natural-rind, raw milk blue cheese, the idea for which began several years ago as a collaboration between Murray’s and Consider Bardwell. That barn? That barn was long ago converted into a state-of-the-art creamery, and it is there that Barden Blue is made. Three weeks later, it comes down to New York City, where we age it in our cheese caves. The result is a buttery blue cheese with chocolaty depth, deep minerality, and the slightest edge of pepper. It looks like this. 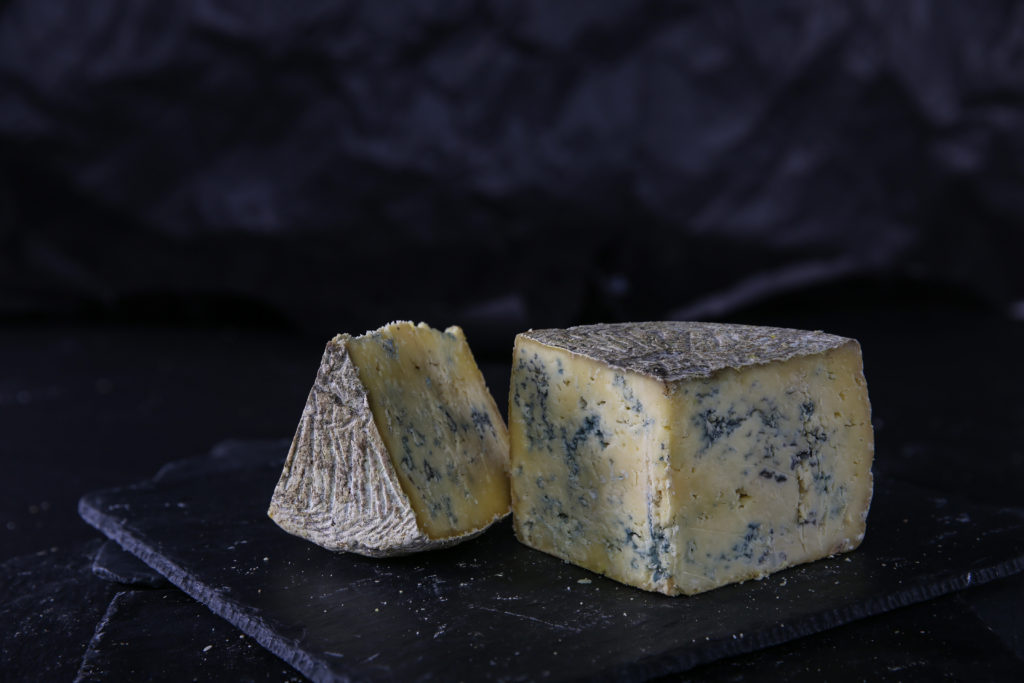 But when we walk to the barn from the guest house, definitely not tripping twice on the way, it looks like this. 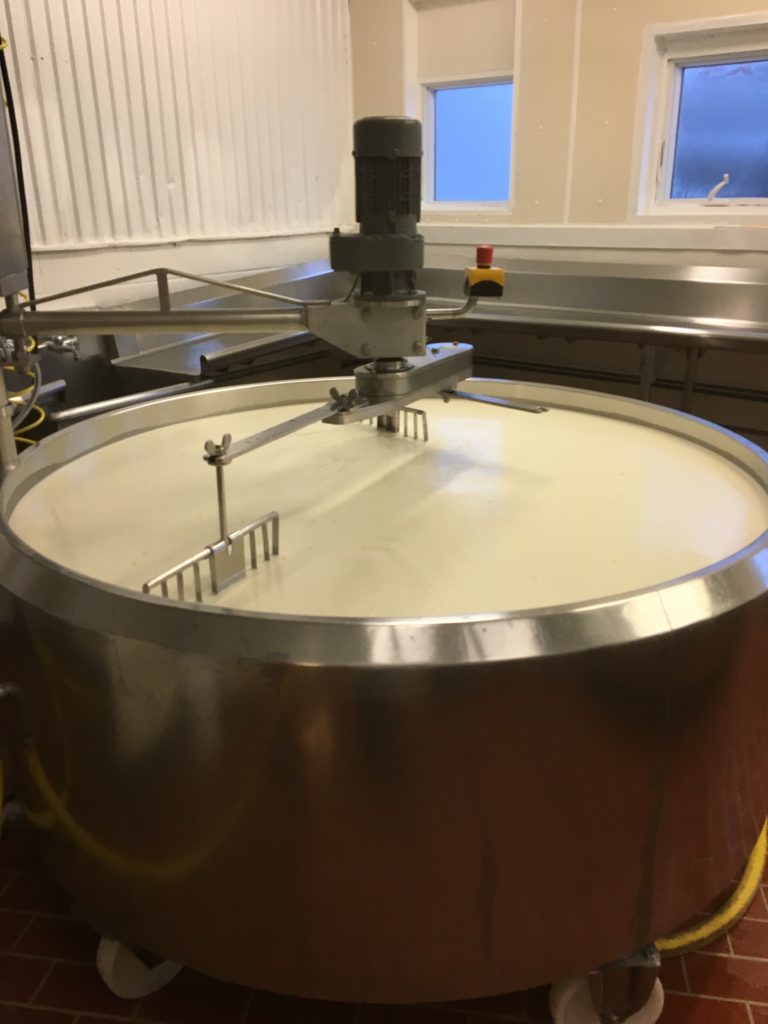 What happens in between those two photos, so that the latter becomes the former? Dear reader, we shall tell you now.

The first thing you need to know is that this is Leslie Goff. 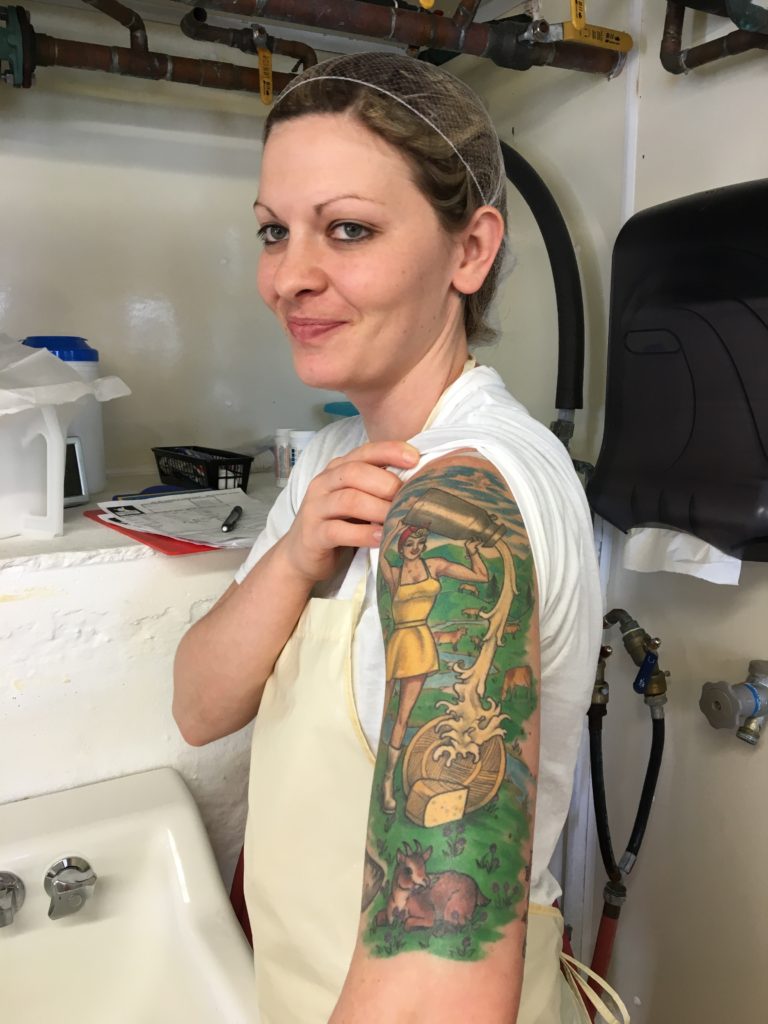 Leslie is the head cheesemaker at Consider Bardwell. She is 28-years-old. She began working at the farm when she was 14. That’s half a life ago. Also, her tattoos are very good.

There is a prevailing notion that cheesemakers are uniformly older dudes with beards. This notion is wrong. Almost the entire Consider Bardwell team is female. This includes all the cheesemakers, who are around the same age as Leslie.

So, here’s how Leslie & Co. do it. The morning’s milk is loaded into the vat, which is then heated to 70 degrees. In goes culture (a proprietary blend, which includes a heavy rotation of bluegrass music), which then gets stirred in as the temperature of the vat is increased to 90. This is when the rennet is stirred in, at which point the contents of the vat are left to coagulate.

Perhaps these sound like simple steps. Having been there to see the process in action, we can assure you: they are not. The work is intensely physical, with a million details and variables to get exactly right. In fact, it took two years of R&D to get Barden Blue to be the cheese it is today. Making cheese well is an exacting, meticulous process.

It also involves a lot of waiting, yet none of that is downtime. Example: you are about to see a photo of Leslie cutting the congealed contents of the vat, so as to separate the curd from the whey. The amount of time it takes from adding the rennet until that moment is one hour. One does not simply watch this happen. There are other vats in which others cheeses are being made, there is cleaning to do, there is highly-detailed documentation at every step. Leslie is not a bored person. Her time is consumed.

Now, here she is cutting the curd. 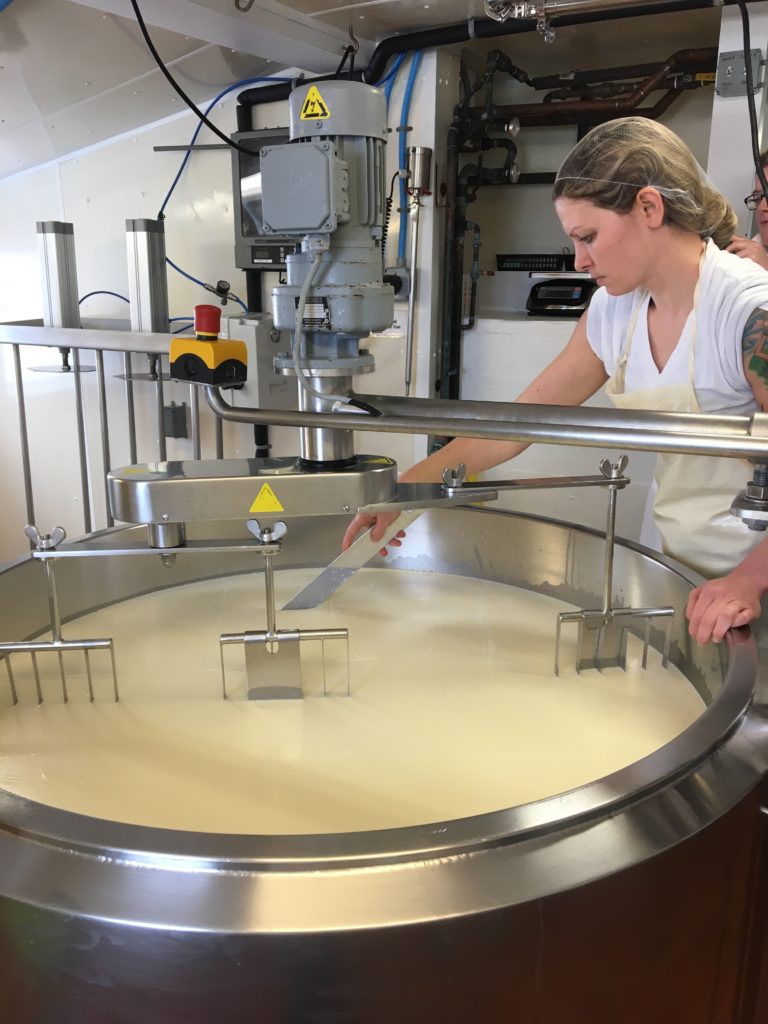 It is a near-magical thing to watch a vat of milk transubstantiate into a jiggly mass like that. We recommend doing it sometime.

So, what happens next is that the vat is churned to get the curds into roughly this shape. 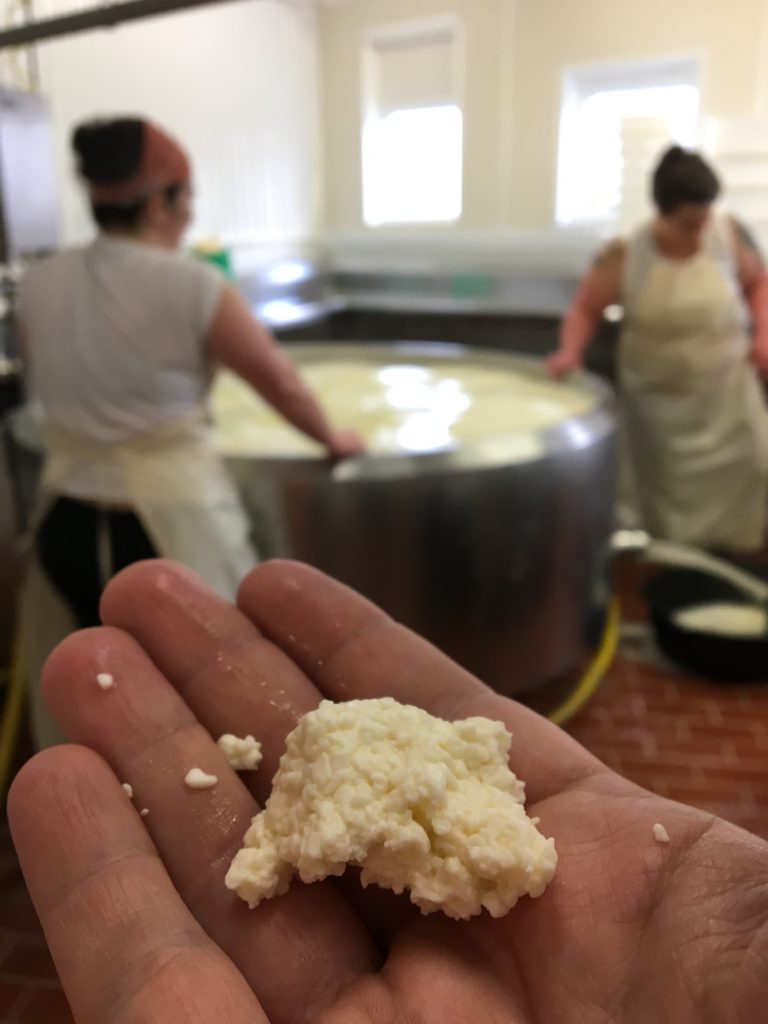 At which point it is salted and drained. While being drained, Leslie’s team commences the step of the process known as hooping. Curds are gathered up by hand and formed into their molds. This is how a cheese gets its shape. 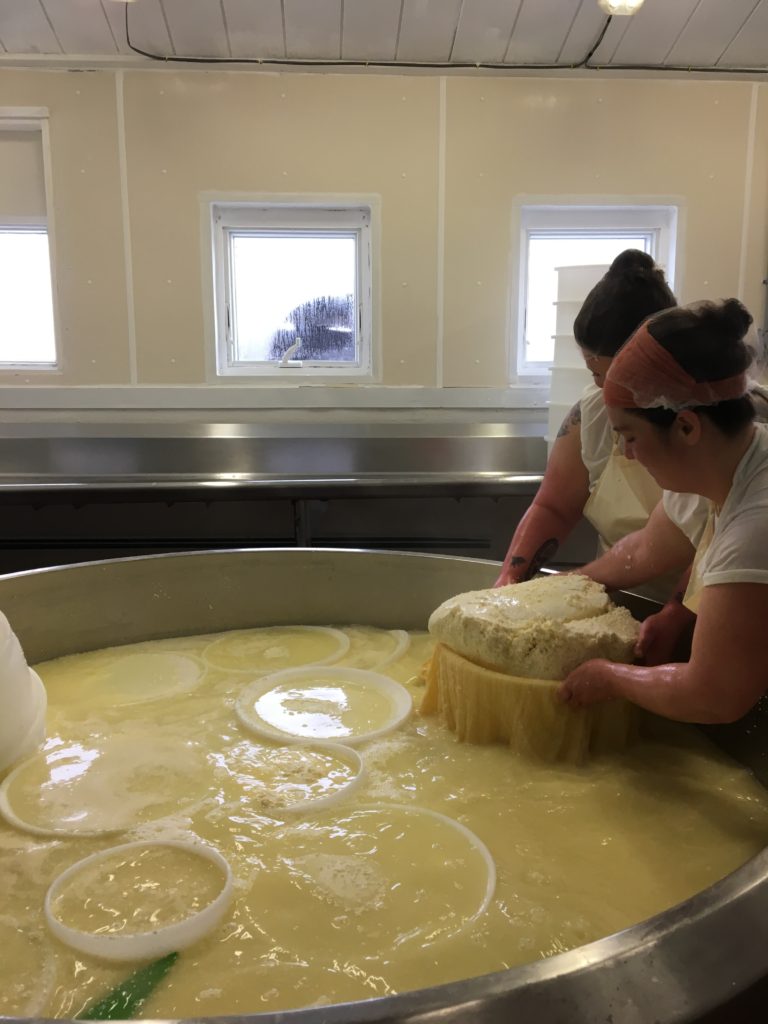 Still, there is plenty of whey in the hoops. Here’s how to get it out. First: drain the hoops. 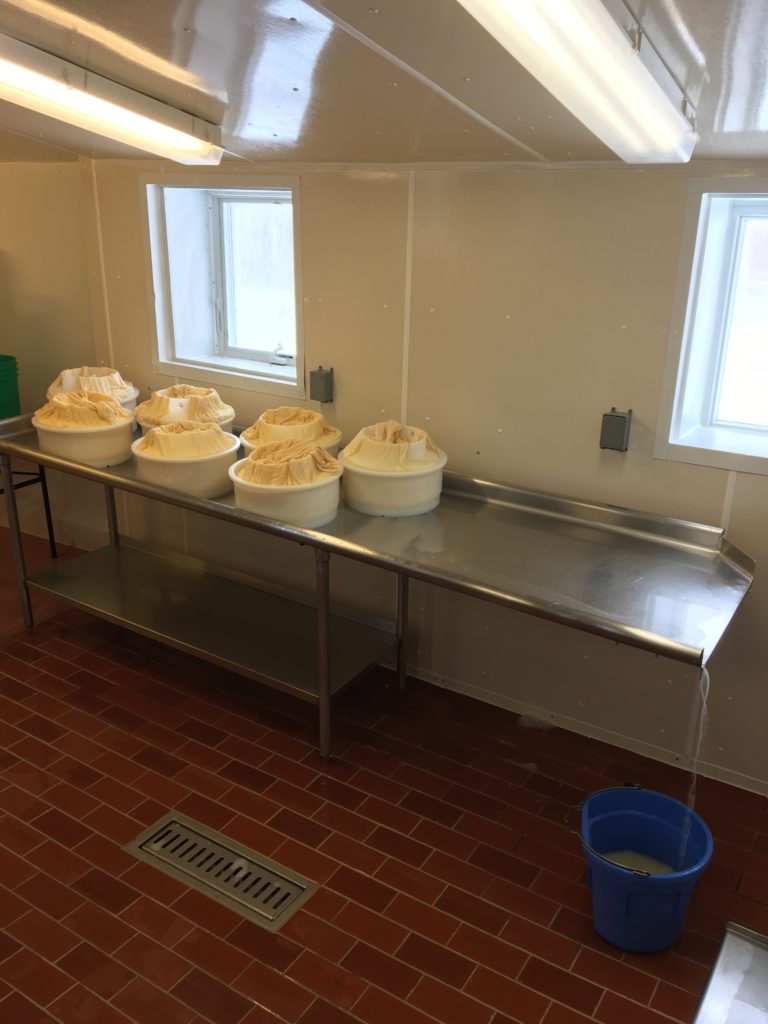 Then: press the hoops. 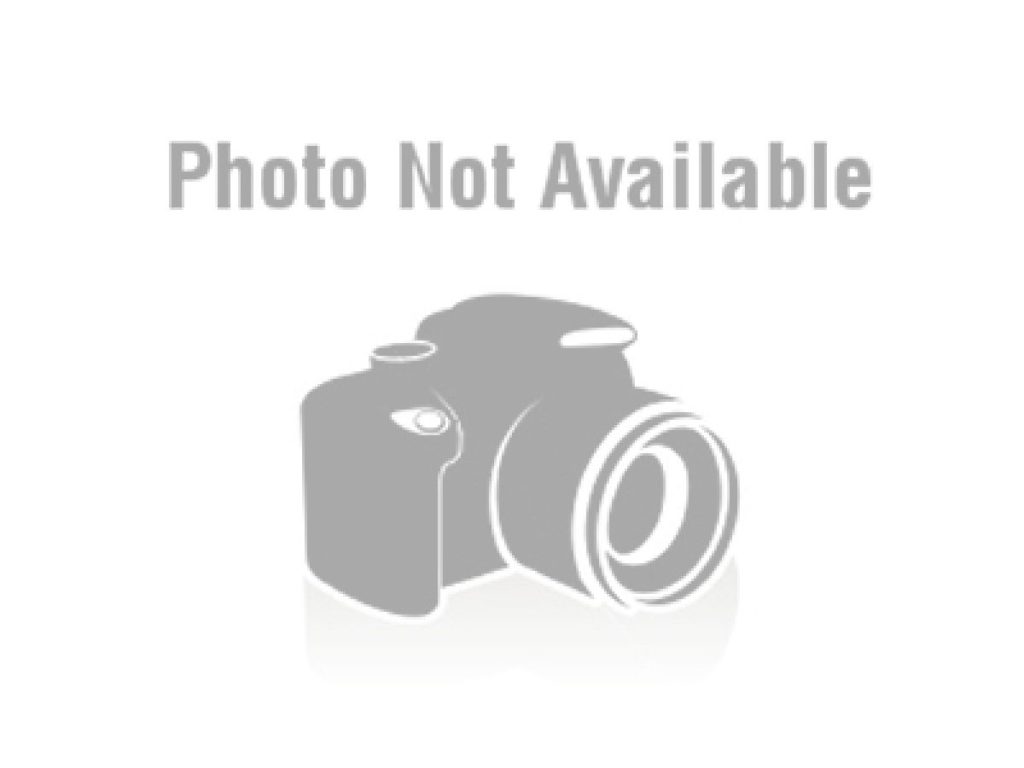 (As we said, there is a lot involved in the process. Capturing it all in one go is a legitimate challenge. Also, some of us were still a bit too bleary to be alert enough to document every step. But it’s a very cool process. Imagine the unavailable photo is this: the hoops are stacked one on top of the other in this contraption that has a big metal slab at the top which then pushes down on the hoops, expelling any excess moisture.)

For context: from the moment that the vat was first heated to the moment when the hoops are drained and pressed, it has been four hours. It is still not lunchtime, but some of us are very hungry.

To be a cheesemaker, do this every single day.

To be a cheese eater, celebrate the fact that, across the world, untold numbers of cheesemakers do this every single day.

And that, in short, is how Barden Blue is formed. Not how it is made, mind you-the cheese still needs to be pierced, transported to our caves, and aged. This is simply the first step of the process.

And Consider Bardwell was simply the first stop on this trip to Vermont. Stay tuned here on the blog, where we will be chronicling our time at Jasper Hill Farm, up in the northeast reaches of the state. They also get up very early. If that leads to more missing photographs, well, our apologies in advance.

One Reply to “Making Barden Blue at Consider Bardwell Farm”