Every day for the last three weeks, my evening routine has been the same: I get home from work, pet my bichon for five minutes in complete silence, and open up my computer to continue cracking away at a mystery that has been eating at me. At the center of the mystery is a Swiss man named Walter Räss, and I am determined to find him.

Walter is a cheesemaker. He lives in northeast Switzerland, in the small village of Tufertschwil, where he runs a cheese dairy. Walter began by producing Appenzeller, some 25 years ago, and he got very, very good at it. One day, his brother-in-law imported a herd of Jersey cows to Switzerland, as brothers-in-law are wont to do, and Walter was asked to produce a cheese with their milk. This was tricky. Jerseys produce milk that is higher in fat content than the Brown Swiss breed native to the Alps. Appenzeller is made by skimming the lower-fat Brown Swiss milk. Instead, Walter left the Jersey milk unskimmed and added rennet that he made himself, along with some yogurt-based cultures developed by his wife Annelies. Once formed into wheels, he left his cheese to sit in the cellar.

As the cheese aged, its flavor moved from ‘eh’ to ‘hot-diggity-dog.’ It had the aroma of cooked custard, the flavor of butterscotch and slowly roasted hazelnuts, and a lingering, almost fruity finish. He called this cheese Challerhocker, which translates roughly to “sitting in the cellar,” just as the cheese itself did.

Imagine yourself as a child again, reader. You are young and hungry, and you are also Swiss now, so you’re probably doing something like abstaining from war or becoming multilingual. Your town cheesemaker has been aging a new cheese, something he promises to be wonderfully tasty, as he’s using the milk of a cow that’s never seen this type of country before. You’ve been waiting patiently for the cheese to mature, and now you’ve gone to check on it and found it has fully done so. “Hooray,” you exclaim. Or, “Urrà,” in Italian, because you can. And then you run to the window of the cellar to proclaim to your town, which has never sent someone off to a combat zone, that the day has arrived. Imagine how happy and beaming you must be. You live in peace, sometimes you dream in Portuguese, which is probably pretty cool, and now your cheese is ready. What glory might you be radiating? What pure joy and glee might be evident upon your face for all your fellow citizens to see?

You are invited to close your eyes and picture that scene. 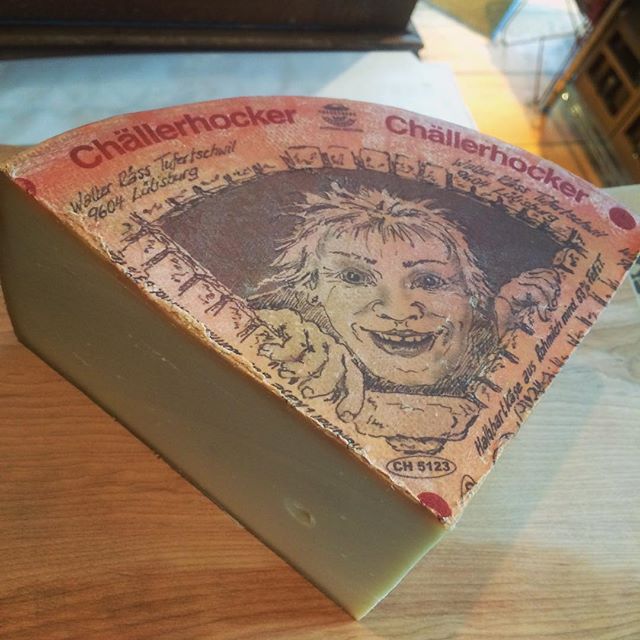 For me, the answer is no. When I was a happy child, I looked quite precious. I bet you did too. I did not look like I was rapt in demonic possession or blood lust. But apparently I have been reading this child all wrong, because the only thing he’s possessed by is the wonder of cheese and the only thing he’s lusting for is a slice of nutty, roasty Challerhocker. That is the story behind this child, known as Challerhocker Boy, who appears on the label of the cheese.

And that is what has kept me up each night, the dog nipping at my pants leg, the groceries remaining uncooked. What is this supposed version of happiness? Who does it belong to? How can what is claimed to be such glee in fact look like such terror? Each night I comb the internet for answers until I fall asleep on my keyboard, sending out a stream of zeroes into infinity. And each morning I wake up exhausted, confused, and no closer to the answer.

And then yesterday, one of my coworkers could not keep from commenting.

“Hey pal, you’ve been looking a little rough lately,” she said. “Everything okay?”

I told her about Challer Boy and my fraying pant legs and how I am no closer to any answer and, therefore, to any sleep.

At which point she said, “Well you should talk to Glenn Hills at Columbia Cheese. They import Challerhocker exclusively and Glenn knows Walter really well. He might have some answers.”

There is an obvious question, and you may be asking it yourself right now: After so many evenings of research, did it not ever occur to you to get in touch with the supplier?

Reader, the answer is no. I am tenacious, and determined, and a tried and true turophile. But I don’t critical think real good. Nevertheless, I am scheduled to speak with Glenn this weekend. Progress, it seems, will finally begin to be made. Stay tuned next week,  as we continue this investigation into the inner life of the Challer Boy. We will find out what is happening behind those eyes, behind that tomato-shaped face, behind what are unequivocally the most unadorable dimples I have ever seen. And we will get there together.

2 Replies to “The Challerhocker Label: An Investigation, Part I”