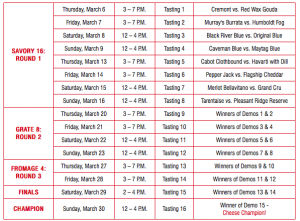 Forget about the Sweet  16…. funky is so much better! It’s the cheese showdown of the year, and we are doing it up the only way we know how: big! And we’re asking YOU to crown the Champion of Curd!

When you cast your vote, you enter the contest to score some pretty rad swag. Complete and submit the full bracket by Wednesday, March 5th  for a shot to win.  If you’re a real cheese wiz, and guess all of the winners, you’ll be entered into a drawing for a $100 Murray’s gift card.

It doesn’t stop there!

From March 6-30th, we’ll be pitting cheese against cheese in the greatest American cheese-off of ALL TIME. Come by one of our shops, in New York or nationwide, and give the two contending curds a nibble (the tasting schedule is to the right). Once you have settled on a favorite you can go online to vote for your favorite! Each time you vote, you’re entered to win big! 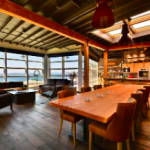 Grand Prize: Slam Dunk! We’re going all-out with this one! One lucky participant will win something really funky – a cheeselover’s dream trip to Seattle! That’s right, we’ll fly you and a pal out to Seattle, put you up in the Beecher’s loft, treat you to a fancy dinner at Boat Street Café, AND a day of cheese-making over Beecher’s Cheese! 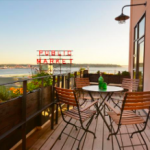 Runners Up: Even if you don’t win the grand prize, 15 will win a  spectacular cheesy gift set, packed full of Murray’s gear.

Below you’ll find some more information on the different producers we will be highlighting during Murray’s Mania. Click on the cheese for even more tasty info!

Want to learn more about Murray’s Mania, or enter the contest? Click here for details!