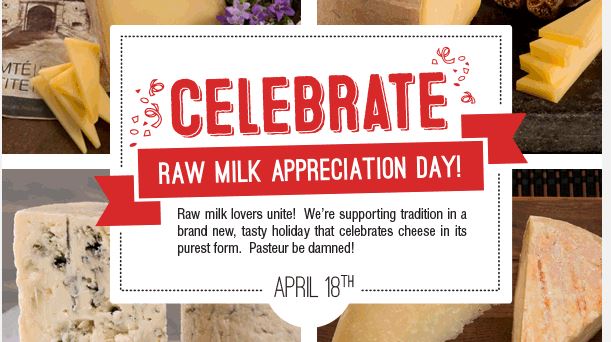 While we appreciate all cheese, those made from raw milk hold a very special place in our heart. While we won’t make the argument that one is better than the other, we will say that the tradition and heritage of unpasteurized cheese is near and dear to our hearts. Having a whole day devoted to celebrating these traditions is important, not just because it helps expose the public to raw cheeses, it also helps to preserve and elevate the presence of cheese made from unpasteurized milk.

So, what is the deal with raw milk cheese? Let’s start with a brief history of cheese itself. Long before refrigeration, the need to preserve liquid dairy was a necessity. It ensured that nothing went to waste, and there would be food available during the times of year (winter) when it was not possible to yield crops. Cheese making is essentially caloric preservation. By removing some of the liquid from milk, condensing it, and through various aging techniques, we were essentially able to control the spoilage of liquid dairy, allowing the final product (cheese) to be consumed with little fear to human health.

What’s the deal with pasteurization?

As agriculture became increasingly more industrialized and centralized, there was an increase in foodborne pathogens. This created a huge risk top human health, and because products like cheese were shifting from farm production to factory production, there was a need to ensure that the final product was homogeneous and fit for human health. Essentially, when we pool liquid dairy from a bunch of different farms into a central processing facility, there is a much greater risk for contamination than just processing the milk on farm. Pasteurization was applied to cheese and liquid dairy (named after the French scientist Louis Pasteur.) This process essentially raises the temperature and keeps it there long enough to kill anything that might be harmful.

So, what’s wrong with pasteurization?

Well, this question is tricky. The short answer? Nothing! Pasteurization is good in the sense that it keeps the milk and cheese that we buy at the grocery store from getting us sick. However, when talking about small cheese makers, pasteurization can be quite harmful for a number of reasons. First, we have been making and consuming these cheeses for hundreds of years, with incredibly scant amounts of sickness. In many foreign countries, these traditions are protected, and certain cheeses MUST use raw milk. In the US, there is a move to increase the limitations and regulations on these cheeses, which would result in the loss of many of our favorite old world favorites from making it to the states. The second issue that many argue that raw milk is an expression of the farm. This milk contains a microbiological community that is unique to the farm on which it is made. By killing these microbes with pasteurization, we are essentially killing the elements that make these cheeses special.

So, now that you know a little more about raw milk, make sure to visit your local cheesemonger and celebrate Raw Milk Appreciation Day with us!