Despite how nice the weather has been, all we can think about is one thing: melty, delicious fondue! And can you blame us? It’s National Cheese Fondue Day, afterall! Fondue is the ideal meal for a cheese lover – just melted cheese, a bit of wine, and whatever you feel like dipping. While we can go on and on about the different ways to enjoy fondue, we first want to ask: Do you know how fondue came to be? Don’t worry, we’re here to tell you all about the history of fondue – how it got its start, what got business booming, and how it spread over to the United States!

Depending on who you ask, the first mention of fondue was in Homer’s Iliad, dated somewhere between 800-725 BCE. Of course, it wasn’t known as fondue at the time (it wouldn’t get that name until the late 19th century). The mixture the Greeks referred to was known as “kykeon” and was made up of goat’s milk, wine, and flour. It was a common drink of peasants, and was a meal that was used to break a sacred fast. Though it’s not the exact recipe as what would later be developed in the Alps, it is close enough to wonder if the ancient Greeks were celebrating Fondue Day too!

It wasn’t until 1699 that we got closer to the traditional fondue recipe that we know today. The original name for the dish was “Kass mit Wein zu kochen”, which means “to cook cheese with wine” – a fairly simple concept, but it laid a framework for what fondue would be. This recipe came from humble origins – it was said that the dish was developed as a method for peasants to make use of leftover bread and cheese during the winter months, when fresh fruits and vegetables were harder to find.

The word fondue didn’t come into play until the late 19th century, taken from the French word, “fondre”, which means “to melt”. Originally it was referencing an egg and cheese dish, but this would quickly change to mean the melty pot of cheese we love. The first modern recipe for fondue was published in 1875, but by this point, it was being presented as the “national dish of Switzerland”. Fondue became further popularized in the 1930s by the Swiss Cheese Union, as a way of increasing cheese consumption. They created regional inspired recipes that were part of the “spiritual defense of Switzerland”. Fondue was seen as a symbol of Swiss unity, due to the marketing campaign by the Swiss Cheese Union where fondue sets were sent to military regiments and event organizers following World War II. 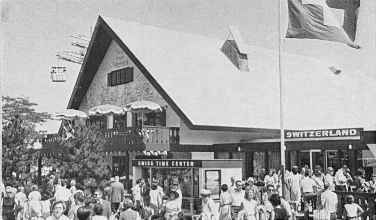 But how did we learn to love fondue here in the States? It was all thanks to the World’s Fair. Fondue was first promoted to Americans by Switzerland for the first time in 1964, at the New York World’s Fair. The dish was served at the Swiss Pavilion’s Alpine restaurant. Fondue was a hit with the local crowds, and it didn’t take long before the recipe spread to New York City restaurants.

If you were to head over to Switzerland to enjoy fondue, you might be surprised by the variety of recipes that are enjoyed across the country. In Geneva, fondue is made “moitié-moitié” – half Gruyere and half Fribourg-style Vacherin. Gruyere is considered one of Switzerland’s most famous cheeses and is noted for its nutty and firm nature. Vacherin is similar to Italian Fontina, featuring acidic, creamy, and woodsy flavors. Another feature of Geneva style fondue is the addition of kirsch, which is a cherry brandy. In eastern Switzerland, the recipe features a mixture of Gruyere and Appenzeller. In Valais, it’s a blend of Gruyere and Raclette, while Bern’s recipe focuses mainly on Emmentaler as the key ingredient. Regardless of where you enjoy your fondue or what recipe you use, nearly all Alpine style cheeses will go great melted into your fondue pot of gooey goodness.

There are many traditions associated with enjoying a pot of fondue. One tradition states that if a man loses his bread in a pot while dipping, he has to buy everyone at the table drinks. If a woman loses her bread, she must kiss her neighbors. Another tradition has to do with “la religieuse” – if fondue is kept at the right temperature, there is a thin crust of toasted cheese that remains at the bottom of the pot when the fondue is finished. Known as “la religieuse”, or “the nun”, it is traditionally fished out of the pot and eaten at the end of the meal. Stories vary as to where the name comes from – some say that it was because monks would save this remaining bite for the nuns in abbey. Others say that la religieuse resembles the cap that nuns would wear during the Middle Ages.