Cheese has a rich history of being central to governmental affairs. Banks in Italy accept Parmigiano Reggiano as collateral for loans and for decades Switzerland had literal cheese cartels. So if you’ve ever thought to yourself, “You know, the Cheese Illuminati seems like it could be a thing,” well, you wouldn’t be entirely off the mark. It’s not some secret society conspiring to pull the levers of government or influence world events so as to establish a cheesy equivalent of a New World Order. Members do, however, dress in long cloaks and elaborate headwraps and wear heavy medallions with pyramidal shapes on them and generally all this regalia is strikingly similar to that of Professor Quirrell, so you’d be forgiven for assuming something surreptitious was afoot. This not-so-secret society is called La Guilde Internationale des Fromagers, and as French Cheese Month comes to a close, we want to tell you a bit about it.

In a nutshell (or, more appropriate, a cheese rind) the Guilde is a group of the most tenured, influential, well-connected, and essential individuals in the world of cheese. Earlier this month we featured a post on Pascal Vittu, Head Fromager at Restaurant Daniel. He’s in the Guilde. We here at Murray’s are proud to have four current team members who have been inducted. The Guilde’s roster essentially doubles as a who’s who of the artisanal cheese industry. 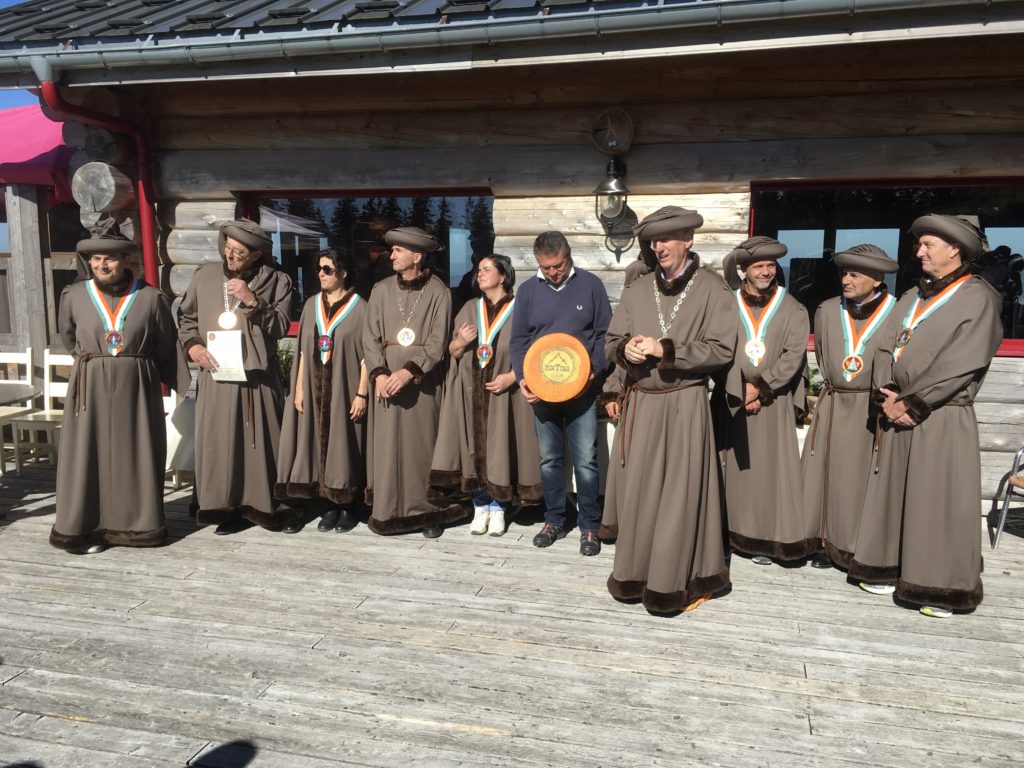 Great, so the movers and shakers of high-quality cheese gather from the world over and wear robes together—but what exactly does the Guilde do? The official mission is “to transmit knowledge through cheese companionship.” If you care deeply about cheese (and of course you do, you spend your time reading the blog of a cheese company) you would want the world’s cheesiest individuals—dairy farmers, affineurs, mongers extraordinaire, fromagers like Pascal—to all have a way of being in touch with one another, sharing their wisdom and methods. The Guilde exists to facilitate that very thing. 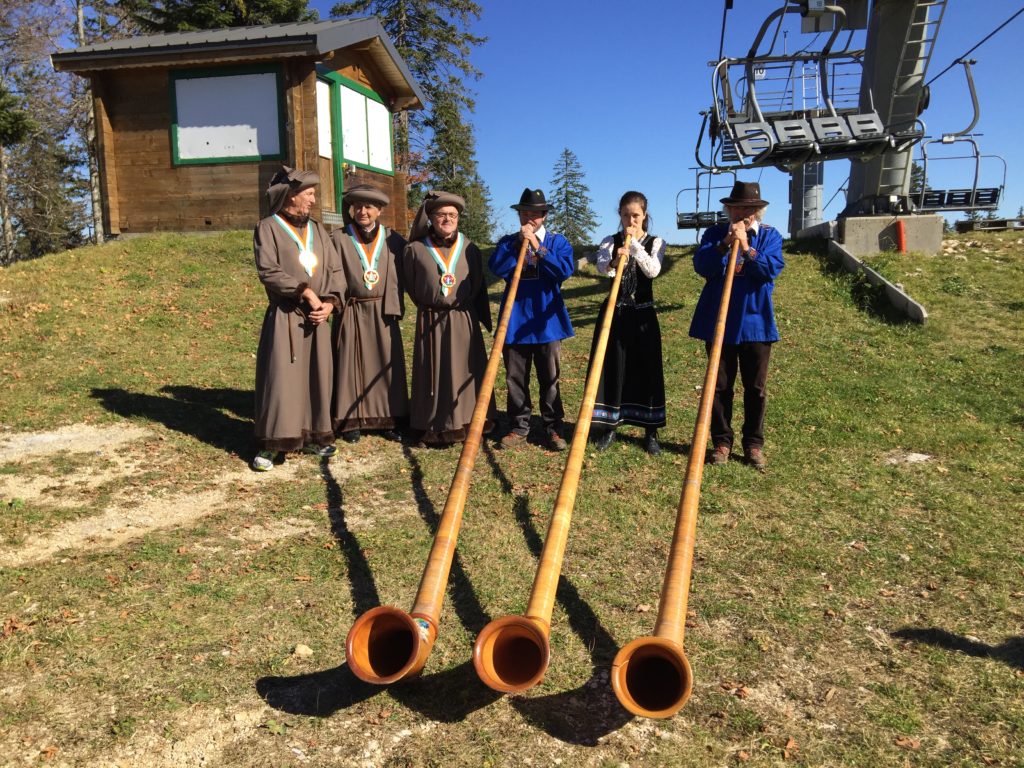 This all started back in 1969, when a man named Pierre Androuet decided the world of cheese could benefit from such a network. Today it is run by Roland Barthelemy, whose official title it “Provost,” but who one of Murray’s Guilde members refers to as the “Pope of Cheese.” Barthelemy began his cheese career close (in both time and place) to where the Guilde was founded. In the 1970s, he had a small Parisian cheese shop and affinage space. His displays were so aesthetically beautiful that it was almost like he was making floral arrangements, and patrons would queue up for hours to shop there. Before Barthelemy’s cheese papacy, cheese wasn’t always scrutinized and considered with the same level of refinement as high cuisine. He’s in large part responsible for encouraging the boom in artisanal cheese in the past few decades. 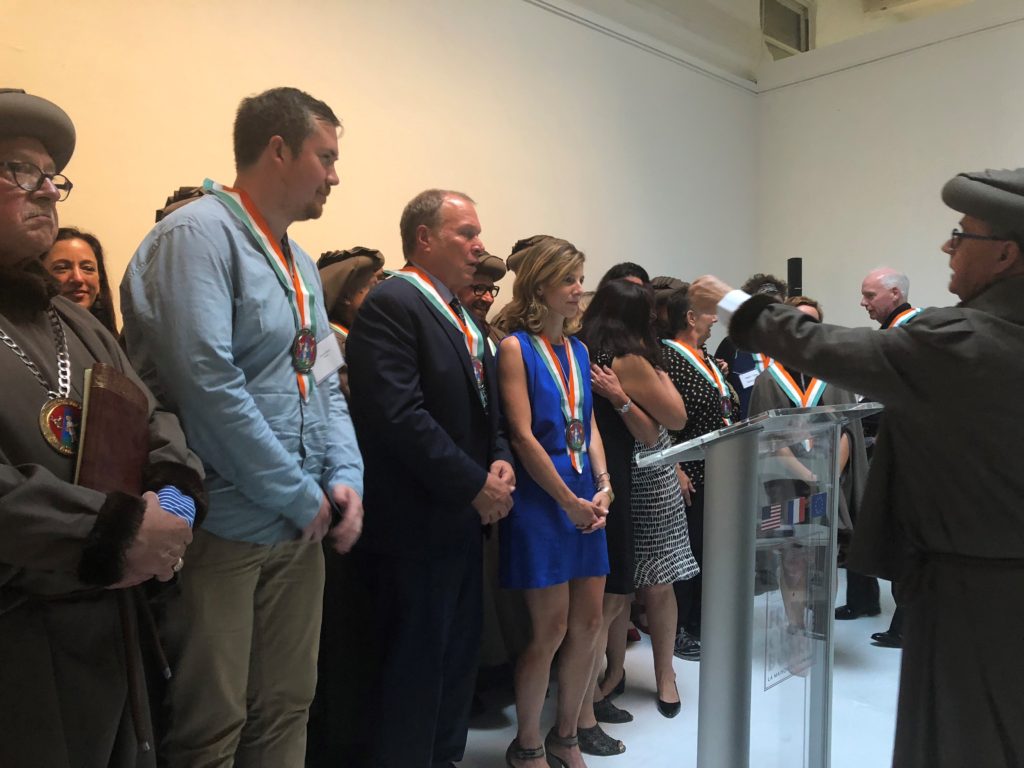 (Our own Walshe Birney [blue shirt] and Elizabeth Chubbuck [blue dress] being inducted into the Guilde this month.]

But Provost isn’t the only rank in the Guilde. There’s Protectors, Ambassadors, Masters, Judges, and on and on. Expect nothing less from a society so finely tailored. And next time you notice that the quality and assortment of cheeses available near you has improved, or that imposter cheeses are no longer as prevalent beside their AOC and PDO counterparts, or that you’re seeing more cheese programs at your favorite restaurants, think of these Protectors and Ambassadors and Masters. They may not be covertly directing the global order, but they are making life cheesier, and that’s something we can all be happy about.