Collaboration has long been a part of the craft beer scene. Breweries partner to create exciting and new concoctions for the world to imbibe. The idea began in 2006 when the revered Russian River Brewing Company partnered with Avery Brewing to make a beer called Collaboration Not Litigation. Today, almost every brewery in the US has worked on a collaboration project of some sort. Collaboration between brewers and cheesemakers in pursuit of creating delicious cheese, however, has a much older provenance and dates back centuries. In fact, beer is at the heart of the creation myth for an entire category of cheeses – the wonderfully funky washed rinds.

Washed rind cheeses first appeared in the Low Countries (think Belgium and the Netherlands) and northern France (Maroilles is a classic example) sometime during the 12th Century. As the story goes, a monk was busy cleaning the walls of a cellar where the monastery stored its freshly made cheese. This monk had a bucket of salted beer that was used as a cleaning agent and a brush which he used to perform his chores. As he was scrubbing away, he noticed mold growing on one of the cheeses. Apparently this was a rather fastidious monk, who decided to clean the surface of the cheese in the same way he was cleaning the cellar – by brushing the cheese with salty beer. After repeated washings, the cheese turned orange and smelled a little funky. The monk decided to give it a try and found the cheese had developed big, roasty flavors and a smooth, creamy paste. With this discovery a new world of cheese making flourished in the monasteries of Europe. To this day many people refer to washed rind cheeses as “monastic” or “monastery” cheese.

Most likely this story oversimplifies the history, but there are probably a few kernels of truth found within. The Cistercian monastic movement was in full swing during this period. This movement was an attempt by a group of monks to return to the exact terms of the Rule of Benedict. One of Benedict’s main teachings was that work is an essential form of prayer. So, a Cistercian monastery is exactly the type of place we would expect to find an overzealous monk scrubbing away at the mold forming on a wheel of cheese. In addition, washed rind cheeses often develop a flavor reminiscent of roasted meat. The Cistercian monks observed a meat free fast on Fridays and during Lent. One could easily see the appeal of a meaty, robust cheese during these occasions.

What exactly is happening with these cheeses? The big contributing factor is salt. By washing the cheese and leaving behind a layer of brine, the surface of washed rind cheeses are primed for salt-loving microbes (and not great for salt-intolerant microbes). For most washed rind cheese this means that certain yeasts (mainly debarymyoces for you microbiology-loving readers) can thrive on the surface of the cheese. These yeasts set the stage for a wave of orange-forming corynebacterium and brevibacterium. Don’t let the Latin names scare you away. These little microbes are responsible for a host of changes in the cheese. Ultimately these colonies of microbes spend their time breaking down the protein in the cheese and creating a wide variety of flavor compounds in the process (not to mention that characteristic orange color).

But those originals yeast need more than just the protein in the cheese to survive. They often need minerals and carbohydrates. And here is where the beer comes into play. Beer is rich in calcium (mineral) and a host of complex carbohydrates. This is an excellent food source for yeasts. Which makes perfect sense considering beer is a product of fermentation by, you guessed it, yeasts. By washing cheese in a salty beer, cheese makers are nurturing a diverse microbial population that is actively transforming the cheese into a rich and creamy treat.

Now that all the background info is behind us, let’s dive into best part – the cheese itself and how a beer washed cheese comes into existence. Recently The Caves Team at Murray’s was challenged to develop a cheese using Hudson Valley Brewery’s Purelake – a sour IPA fermented with wine grapes.

The first step was select a base cheese to wash in the beer. The desire was to allow the bright acidity and fruitiness of Purelake to mingle nicely with the deep umami flavors that come with washed rind cheeses. In order to accomplish this feat a smaller cheese with a high ratio of surface area to paste was needed. If the cheese is too large, the little residual wash that builds on the outside of the cheese is not enough to impact its final flavor. This was to be a regional cheese, and the hope was to work with a creamery close to Hudson Valley Brewing in New York. Four Fat Fowl’s decadent triple crème, St. Stephen, fit the bill perfectly. When young, Stephen’s paste has a firm, buttery texture that holds up well to being washed and the size was perfect for the project. 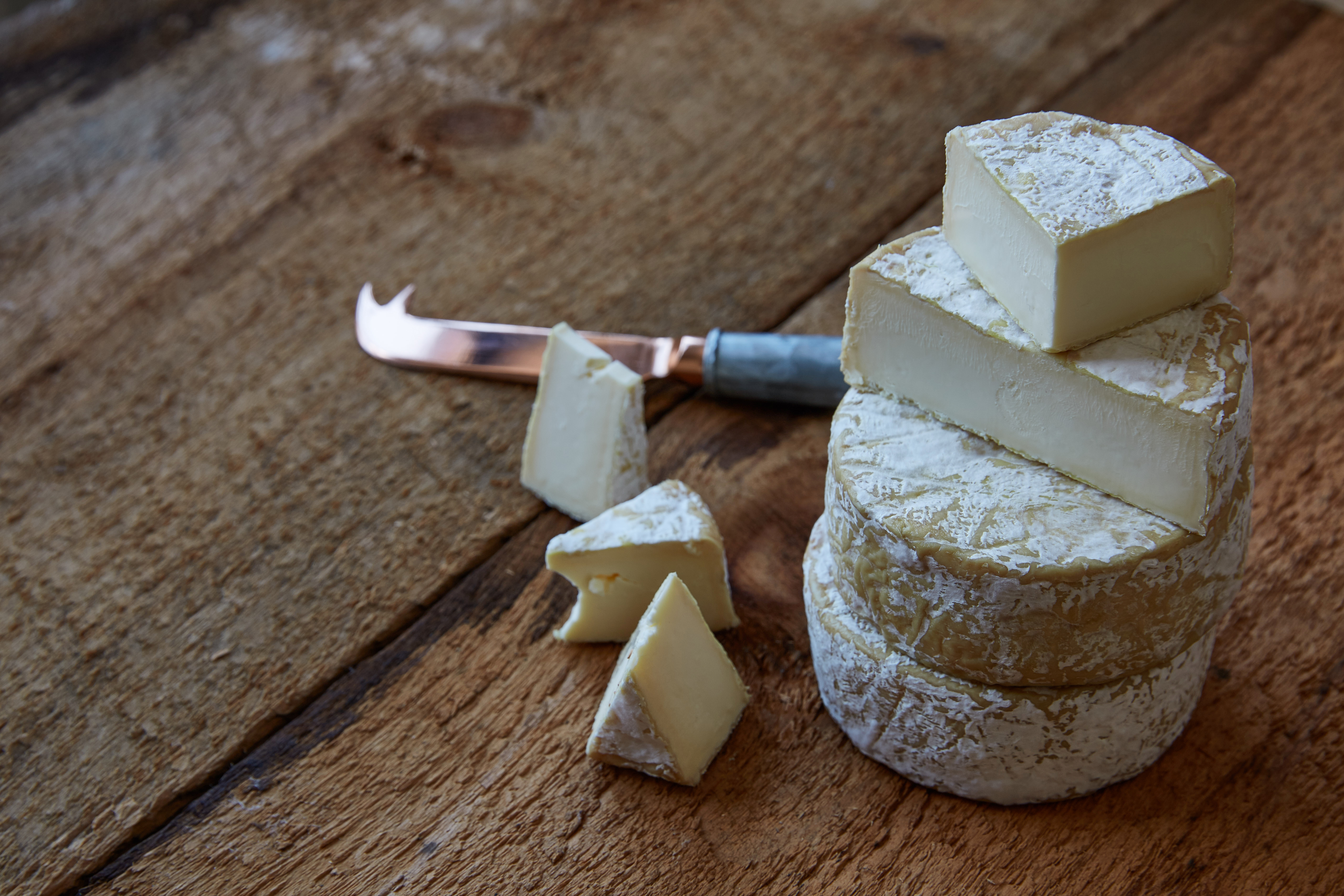 With a green (i.e. young or unaged) cheese in hand the Cave’s Team moved on to developing the wash. Purelake has a relatively high alcohol content – at least from a cheese maker’s perspective. If there is too much alcohol in the wash, it will simply destroy any microbes on the surface of the cheese and the cheese will never develop. To solve this problem, the beer is diluted to bring the alcohol content down. However, if you dilute the beer too much, its flavor won’t influence the final cheese. After a few rounds of research and development a balance of beer, water and salt was reached. The end result was The Dutchess, a dark triple crème marked by a complex saltiness that marries the tart fruit notes of Purelake with brothy comfort of St. Stephen.

To further explore Murray’s beer washed creations, check out Murray’s Cavemaster Reserve Hollander Special Edition, aka Brebis Rose. This sheep’s milk tomme begins its life in the Pyrenees Mountains of southwest France and travels to New York where it is pampered with washes of cherry kriek (a sour style of beer originating in Belgium). The end result is a savory cheese with notes of roast beef and stoneground mustard. And, though not technically a beer washed cheese, the hard apple cider washed Greensward is always a crowd pleaser.

Looking for more beer and cheese suggestions? Check these out:

You Spilled Beer on My Cheese!

The Murray’s Guide to Beer and Cheese

Editor’s Note: This Blog was guest-written by Josh Windsor, a dedicated member and beer-washed cheese lover on the Murray’s Caves Team!

One Reply to “Monks and Microbes: The History, Science, and Experiments of Beer Washed Cheeses”